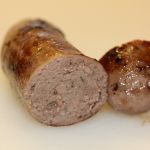 I won't make too much fuss but I do like venison prepared as a sausage! However what's mixed with it to provide some fat content is important. In this case, pork. Good choice.

Venison is a lean meat and as such if you were to make a venison only sausage it would be very firm and very dry! So adding beef or pork to provide the fat is certainly an option, but add beef and the whole sausage will taste of beef. Add pork though and you will still taste the venison.

We've sampled a few venison sausages for our "other than pork" reviews, and these Waitrose venison and pork with port, thyme and citrus are certainly different. Produced from free range red deer, sourced from a small group of specialist farmers operating sustainable farming methods. Good quality ingredients, within natural skins, is the way to make difference.

In the raw they are not so deep in colour as some, and when cooked they are also slightly less coloured, but the taste is certainly still gamey and rich. The port, thyme and orange citrus creates an edge and gives them a notable difference. Texture-wise there is a definite crumble which is no doubt by virtue of the added 16% pork with the 66% venison. The crumble though did cause concern with some of the troops however. There were a few comments about the contents being too loose and crumbly when the sausage was cut. Not a major issue but one that affected the overall scoring. !