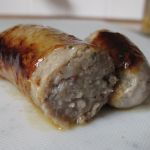 We were in Waitrose this week, which doesn't happen very often, but I spied these Tangy Pork sausages. They sounded interesting so we gave them a go.

Disappointing unfortunately. Sorry to be blunt. The appearance to me was very good (see photos), and the makings listed 78% British pork with 5% buttered onions and 5% wholegrain ale mustard, in natural pork skins which had all the right boxes ticked, but it was the cooking that revealed an alternate reality.

We don't like sausages that exude that white emulsion stuff like you get with pork chops cooked in the oven, which in our case eventually burns in the pan then sticks to the outside of the sausages making them slimy and very sticky. It may be prime cuts of pork being used, but we no like!

There was quite a bit of residual oil left in the pan and what was surprising (I had to take an additional photo) when I cut the sample sausage to photo as I would normally, 4g of oil just ran out! I know it was 4g as the sausage was on the scales with a reading of 57g before I cut it. Take the sausage away, 4g left... Should have read the cooking instructions for pan fry...says "drain well before serving"! Hey ho...

Then, to cap it all, really chewy skins. (Sigh!)

If it wasn't for the very good texture just under medium, plus what was an excellent flavour with the mustard and onions, and a tick in the box for when eaten cold, these Waitrose sausages may have started our 2015 sampling year, scoring just a single banger mark.

Now OK we know these aren't pitched as premium sausages being at a special offer £5 for two 400g packs, but they have a Waitrose label implying some quality, so come on Waitrose product managers, have another look at these.

Definitely not something we would choose to buy again.. ! 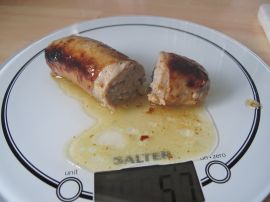 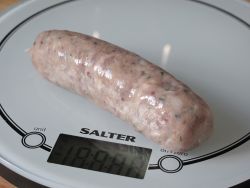 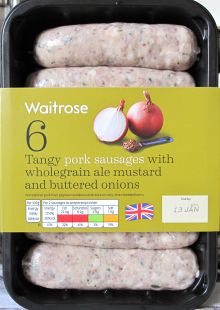