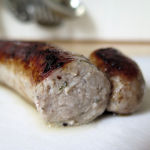 I'd called in to our local Waitrose this week, mainly to buy some lunch, use their car park and drop by my local camera shop opposite!  I didn't realise a client of mine worked in the store...on the butchery counter!  You can see where this is going perhaps...?

After a quick hello and a catch-up, sausages cropped up in the conversation and the Gloucester Old Spot Pork & Sage were recommended as something perhaps we really should be samping.  So enthusiastic was my client that she wrapped two up for me to try and stuck a label on them so that at the checkout I wouldn't have to pay for them.  Free I said? How's this? Are you allowed to do this? So it would appear, the answer is yes!  Nice one Waitrose...

These sausages are "big-uns" at average 109g a go and 140mm long.  61% pork shoulder and 29% pork belly...that's some percentage I'm sure you'll agree, along with seasonings, sage, black pepper and nutmeg, all loaded in to natural hog casings.  Labelling also saying containing "fortified wheat flour" rather than bread or rusk...hmm?

Cooked up the skins browned well and looked very good.  Very little residual fat remaining after cooking in the pan we might add.

Now here's the interesting bit.  On cutting these sausages they were very moist, almost on the edge of being watery. (See photo below)  Perhaps this is not best described, but along with this they were quite soft to the bite and chew.  The sausage tore rather than cut cleanly which isn't an issue but it was surprising as we didn't expect it. With such a percentage of meat (90%) I would have expected them to be firmer.  The texture of the meat was quite close yet crumbly in a soft way. We are not "dissing" these as with just a touch of sage they were tasting very good. It's just the texture just didn't feel quite right...well for us anyway.

Price-wise at £7.99 / Kg is pretty good for these sausages given the meat content, but we weren't taken completely on the softness of them.

Would we buy again?  Yes probably for the BBQ! 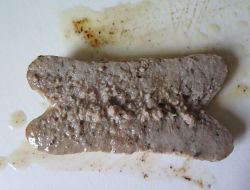 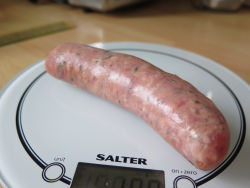