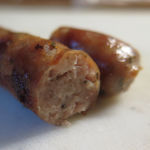 Happened to take advantage of parking in our local Waitrose car park this week, and so picked up a pack of their Pork & Herb Chipolata sausages (and some odd bits of shopping), so that we got free parking and a complimentary coffee!. We tried these Pork & Herb Chipolatas last in May 2015, so yeah, Ok, it was way overdue that we tried these again...

The packaging hasn't changed dramatically and still says they are aromatic pork and herb chipolatas seasoned with rosemary and thyme, made with prime British pork from pigs born outdoors and reared in airy, straw bedded barns.  Yep we'll go with that...

The skins were quite fine just as before and they did cook up OK but they didn't get as snappy as we like, however a pretty good chew all the same. There was this time just a touch of that pale emulsion ooze that we see sometimes from sausages when cooked. This however disappeared but the bottom of the pan needed a bit of work to clean the residue afterwards.  Interestingly the teaspoon of oil initially in the pan disappeared to so apart from the drop that would have been covering the 12 chipolatas, the rest must have been absorbed perhaps?

Nice to see "pan fry" on the prep instructions.  More often on packets/sleeves these days is only the oven cook and grill instructions. If we had of grilled I think that these little chipolatas my have dried out significantly!

If honest we were expecting a slightly more dense texture given the 88% pork, however the taste with the rosemary and thyme was pretty fair but the seasoning was a little lacking.  Eaten cold later, not bad but a little disappointing as any seasoning they did have, was gone unfortunately.

Price-wise two 375g packs for £5 was still the deal, but the large weight loss and shrinkage on what are smallish sausages anyway, could not be ignored unfortunately. Good job only myself and two others were eating as the recommended servings for this pack is 6!  Now come on Waitrose, regardless of the calorie count, two tiny chipolatas per serving cannot surely be enough for an adult!  Thus this fact and shrinkage was reflected in the scoring we awarded.

Would we buy again? Probably not...however saying that, as a breakfast sausage these would work pretty good when alongside the normal full English ingredients. 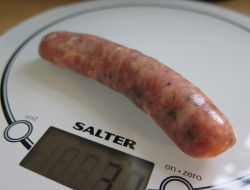 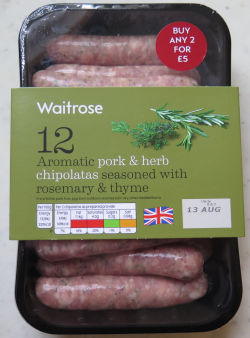