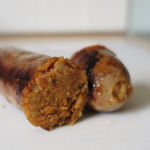 Calling in to our local Waitrose this week to pickup a spot of lunch whilst out and about on business, I spotted these and given there's only 4 to a pack, didn't inspire me to buy them that much, however hickory flavoured pork and butter beans jumbo sized with American mustard sounded intriguing...

Concern that I've gone "veggy" what with the fact these sausages are labelled as 25% vegetables, was keenly expressed by the troops here, and my senior partner (The "missus") added that after all these years, she still didn't like butter beans, so getting sampling going became a task and half!

I have to say, cooking up the aroma from the pan was very good with a good whiff of smokiness. The natural skins did the business and worked well, browning nicely and retaining their contents very well without splits and bursts. We did have a few eruptions though from sausages ends, which detracts a bit from the overall look, but given the quantity of "veg" (vegetables, pulses and fruit) in the mix I'm not surprised to be honest. The bite and chew though was a tad heavy going.  The skins were notably chewy.

The texture of the cooked sausage was quite soft and open (see photo of sliced sausage) and very moist and succulent.  The smokiness of the hickory pork was OK but far less than I expected, but the butter bean flavour was a bit too much here for a couple of the troops.  The American mustard though wasn't that evident and a bit disappointing however to be fair, overall not a bad flavour with a touch of spiciness.

Complex flavours and British outdoor reared pork though however didn't inspire unfortunately.  The "chewiness" of the skins and the overall butter bean flavour didn't impress either and given the amount of noticeable shrinkage and weight loss in cooking resulted in these sausages being judged, as just about an OK sausage.

Price-wise at £3.29 a pack (£8.23/kg) puts these in to approaching premium sausage status which they are sadly not. We bought them on offer at 2 packs for £5 which was better but would we buy again?  No, probably not. 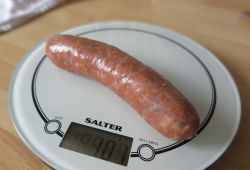 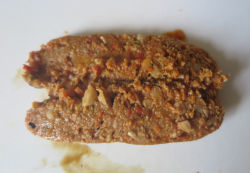 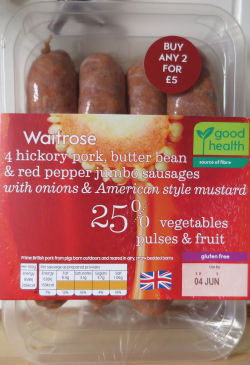