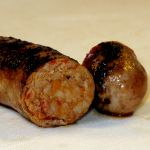 When we were in Waitrose this week, we also picked up a pack of their chorizo sausages. They looked really interesting in the red pack with the deep colour of the sausages, so we gave them a go.

Cooked up the skins browned well and produced a medium firm bite with a pretty good chew. If honest we were expecting a slightly more dense texture though perhaps similar to other chorizo we've tried in the past. Medium and slightly crumbly is what we found, which is OK I suppose, but not exciting!

The seasoning of garlic and black pepper etc., comes through nicely and there's a gentle warm taste on the palette after eating, which is pretty good but not exciting.

Price-wise OK but they are just within premium sausage price territory at £8.23/kg, which perhaps they are not. So given the amount of weight loss and shrinkage then you may consider these as expensive for what you get. Worth a try though, just as we did...

Eaten cold later, not bad at all.

Would we buy again? Probably, perhaps... ! 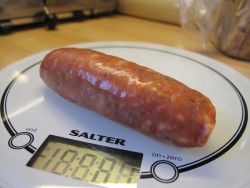 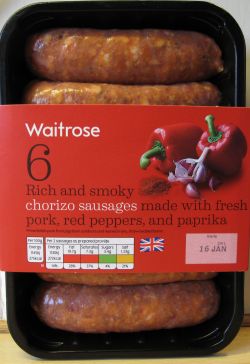