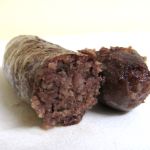 Another producer who were seen at the recent 2012 Maldon Best of British Sausage Awards, were Totham Bangers. We sourced some traditional pork for our next review...

Totham Bangers of Great Totham (nr Maldon) sell their produce via farmers markets and farm shops such as Poplar Nurseries at Marks Tey where we picked up our sample.

The packaging is a bit light on information as to what percentage meat content and the casings used but from the feel these traditional pork are a good firm sausage that would indicate a higher percentage. In fact from the web site we see that all the sausage range produced are actually averaging over 93%...

The contents are not too tightly stuffed and look very good.

When cooked up they're a really good meaty, medium/coarse texture, succulent, firm and tasty sausage. Not heavy on spice agreed, but with good skins and a very decent chew.

Quite expensive at approx 67p a go via the farm shop but bought direct from a farmers market for example these may be a bit less in price, but what you definitely get is a premium grade sausage.

I don't know about you but I don't mind paying that bit more to get a superior tasting product. 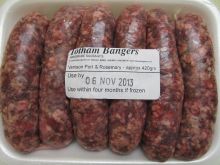