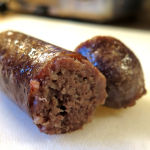 We've been sampling a few varieties of sausages from Totham Bangers sold via farmers markets and farm shops such as the excellent Poplar Nurseries at Marks Tey near Colchester (on the A120) is where you can probably (if they have stock) pick up a pack or two for yourselves...

These particular beef and horseradish sausages looked excellent in the raw and going by the previous examples we were going to be in for a treat!

Beef sausages do have a tendency to taste like a "beef burger in a sausage skin" unfortunately but that the way it is, but with some added horseradish to lift the taste buds this should add some zing.  I'll admit to losing the little white adhesive label indicating meat percentage (doh!) however from previous examples we'd say 80% plus in natural skins.

Like other Totham Bangers sausages quite solid in the raw, true, but as we've said before with such a high percentage of meat you would expect that.  Cooked up they browned well and provided a texture of just under medium to coarse with a very good bite.  Taste-wise we agreed, unfortunately we only got a very light horseradish "twinkle".  Which was a bit disappointing to be honest, but I suppose if there had been too much of a horseradish "punch" then some people may have been dissatisfied which ever way?

Just so we could "taste the difference" as it were, we resorted to a jar of Colmans Horseradish Sauce, added just a touch and...wahey!  There you go...

The bottom line:   A very good well made sausage but you may need to add a touch of extra horseradish to your individual taste... 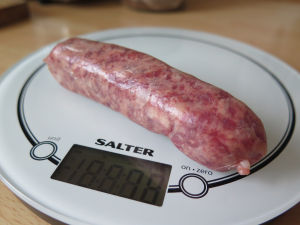