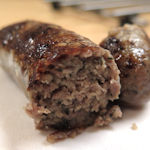 These 93% lamb sausages from Totham Bangers of Great Totham (nr Maldon) are very, very good and make it in to our "all time Top 5 - other than pork" reviews.

We've tried a few varieties from Totham Bangers and these ones are far the best to date for flavour and texture.  Sold via farmers markets and farm shops such as the excellent Poplar Nurseries at Marks Tey near Colchester is where you can pick up some for yourselves...

In the raw and looking pretty good, the colouring first caught my attention when viewing the foodie delights in the cabinet at Poplar Nurseries food hall. I particularly like lamb with some mint sauce for Sunday roast, so to get same in a sausage, a result. Yes OK other producers may do the same or similar combination, but I'll be bold and say, these particular Lamb & Mint sausages will take some beating!

Pretty solid sausages in the raw, true, but with such a high percentage of meat you would expect that.  So would the high meat percentage effect the succulence though?  Would they be too dry?  We didn't have to worry it turns out because they were very very good.

Natural skins is what we prefer.  No splits or bursts when pan fried.  Yes agreed a fair bit of residual oil left in the pan, but lamb does that.

The texture was just under medium to coarse and provided a very pleasing bite as far as I was concerned personally.  The troops agreed too.

Taste-wise, they were extremely good.  Just enough mint to taste without overpowering the meat.

Shrinkage and weight-loss figures were OK. I expected some weight-loss given these were lamb, but to be honest we've had pork sausages loose more weight in cooking. Now before you say, yes they're expensive per sausage!  Lamb is expensive, so production costs will be higher.  So consider these a "treat"...

Eaten cold later...delightfully spot on!  Not greasy at all as you may expect with cold lamb.  Really nice and retaining a delicate "minti-ness".


So the bottom line:   A very good well made sausage that you've just got to try yourselves...you won't go wrong! 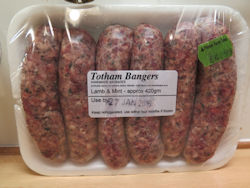 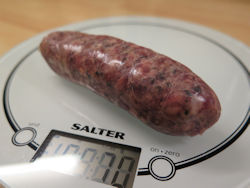