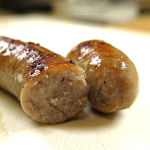 Revisiting reviews and looking for consistency or improvements is interesting.  We last looked at these Sainsbury's chipolatas in July 2012 so they were way due another look...

Immediately noticeable is the packaging.  The use of a "twin" pack is different.  Sainsbury's say "This handy new pack contains 16 chipolatas sealed in 2 separate compartments, to give you the choice either to eat straightaway or keep for another meal time, helping to reduce food waste".  Well that may be true but we cooked up the lot and didn't save any, but then again we're in to sausages aren't we?

These sausages still do look good in the raw.  They're still 97% prime outdoor bred British pork but it seems they may have dropped the reference to a Heap's exclusive recipe for them and the headline that they are "Ultimate" on the packaging.  Well that aside they still look good anyway.  The write up on the packaging of these Taste the Difference Chipolatas goes on to say " Our classic sausage recipe combines coarsely minced pork shoulder and succulent pork belly with a dash of sage and spice to create the ultimate meaty chipolata."  Ah! the ultimate reference is still there.

OK it looks like the recipe has changed because these are now badged "gluten free" and don't have bread crumbs as a binder.  There's no reference to what has been used in place of this ingredient unfortunately but given the softness we suspect an emulsion type ingredient.  Our previous review found these chipolatas quite meaty and a good bite, but this time they were a bit softer and noticeably different.  The skins also weren't quite as snappy and slightly chewy when cooked.  They are an OK sausage but not as good as last time we reviewed so much so that we've dropped them a half point.

Yes they may be "Freedom Food" and the meat is from pigs are born outdoors and after weaning moved inside to be reared in straw bedded barns, and from British farms approved to strict RSPCA welfare standards, but the taste, although lightly seasoned with pepper and sage may be similar to previous, the texture and skins aren't close.

Shame really...come on Sainsbury's!  We certainly tasted the difference here! 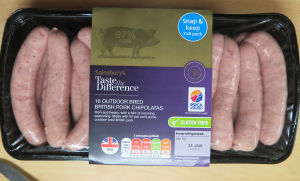 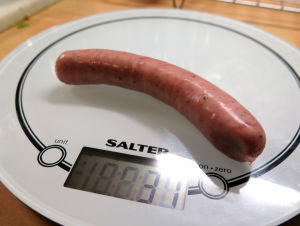 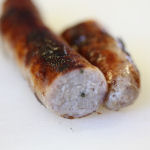