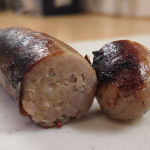 I like a Leek and Mustard sausage, it's a fact. So spotting these in the sausages section in our local store was a result to be sure, however getting them to the checkout in amongst the rest of the shopping without them being spotted was a challenge. I'm told I buy and stock the freezer with too many sausages!  Come on how can you have too many sausages?

These sausages though do look good in the raw.  From the labelling they're 79% pork with 6% leeks and 5% English mustard, with other ingredients including breadcrumbs, turmeric salt, cloves and both yellow and brown mustard seeds. The natural skins looked pretty fair too.

Cooked up the skins worked well with no splits, and no pale ooze as we sometimes see these days.  In fact these sausages cooked up and browned really well, but with not much of an aroma from the pan as we were expecting to be honest.

Taste-wise there was a mustard dry-ness but not what we would expect from English mustard.  You know the sort that hits the back of your throat and nose.  There was also not much in terms of leek to be seen.  Yes there was succulence which no doubt the leek assisted, but the taste was a bit "lacking" to what we had expected. Fair shrinkage and weight loss results (Details below). Texture-wise medium, with a reasonable bite...

Then I bit down and crunched a tiny piece of bone. Then one of the team had the same experience.  Not good then...first two out of six sausages with crunchy bits!  The remainder of the sausages were eaten carefully.  The team were not impressed and we decided to mark these accordingly.

However we were in Sainsbury's later that week so I thought I would have a word with the butchery department to bring the matter to their attention. I wasn't complaining, just making them aware that there may have been bone in that particular batch. Customer services were not busy as we entered the store so I asked should I raise with the butchery direct, and was pleasantly surprised that as I had the packaging labelling on me, I was offered a full refund!  I said again that I hadn't come in for a refund as we'd eaten them.  Customers services apologised and insisted I take the refund all the same. Well done Sainsbury's.

So the bottom line...these Leek & Mustard's are yes, an OK sausage, but not outstanding unfortunately and if honest, not something we would buy again ourselves. 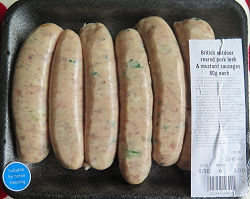 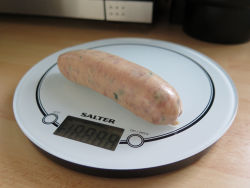