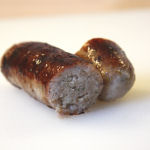 We've never been disappointed with Priors Hall Farm sausages as the quality of the product is always consistent. Hot or when cold eaten later they're very good.

We've noticed since earlier this year that the packaging has changed and the individual size of sausages has increased slightly, so spotting these Pork & Leek on the shelf in our local supermarket, we thought we would give them a go too.

Priors Hall Farm's Traditional Pork are the benchmark that other reviews we conduct are judged against as their flavour, texture, bite and quality of the skins are what you would expect and should get with a proper sausage, so let's see how their Pork and Leek stack up.

80% pork in decent quality casings is always what we like. Well they cooked up and browned really well and had a good bite and texture, but we found them quite mild. The leek flavour really didn't appear to be very noticeable, but the taste of the pork was very good as we would expect. Shrinkage and weight loss were a tadge higher than we would normally observe.

OK we would have marked slightly higher if these had had a more defined "leeky flavour", but not with standing that, these are still a blooming good everyday sausage. 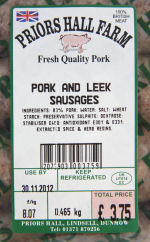 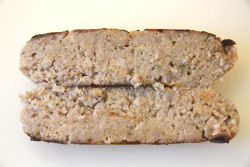