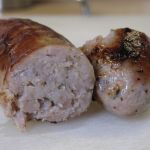 Priors Hall Farm sausages as far as we are concerned are still our benchmark that others are judged against, as their flavour, texture, bite and quality of the skins are what you would expect and should get with a proper sausage.

These FARMHOUSE sausages could perhaps push the benchmark even higher.

Our local store used to stock a wide variety of flavours from this producer, but locally now we can’t get the full range, so it was with particular pleasure that whilst visiting Pearces Farm Shop on the A10 southbound near Puckeridge (Hertfordshire) we spied a whole shelf of produce from Priors Hall Farm.

Now we’ve sampled other farmhouse sausages, and these are by far the best tasted. The sage added to the mix certainly gives them a lift and makes for an excellent taste experience, and using rusk as a filler as opposed to breadcrumbs as we’ve seen in other farmhouse examples, certainly works for the better we think.

The little shrinkage and minimum weight loss, also certainly scored a plus when it comes to value.

We tried a couple simply in a sandwich of harvest grain bread. The silence was deafening apart from the nom, noms and a mmmmm ! All then washed down with a mug of English breakfast tea of coarse. So there you have it. Spot on!

Priors Hall Farm have produced an extremely good FARMHOUSE sausage which would be certainly without doubt worth trying yourselves.

Sausage quality available at retail that we’ve seen has generally improved over the last few years with more “artisan” and small scale producers turning out some notably high quality produce and selling through garden centres, farm shops, farmers markets and local supermarkets. We’ll continue our quest to find those 5 Banger Mark sausages out there…then let you know about them! Watch this space as they say… 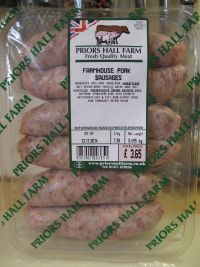 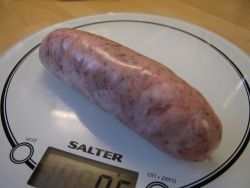 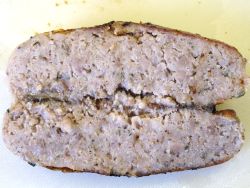 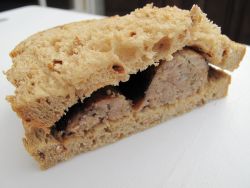