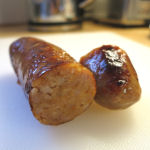 We attended a local Christmas Farmers Market at the weekend and Priors Hall Farm sausages and pork product was available from their stall.

In chatting with the Priors Hall Farm peeps I mentioned about our recent sampling of their Pork & Leek and the surprisingly rather mild flavour. They asked whether we had tried others from the full range of sausages and although I nodded, I wasn't entirely sure. Most of the sausages on the stall had sold out (which must be a good sign) and what was left we had tried. We did buy some haslet though (I like this even if the young'ns don't).

So when I called in to our local store who also stocks Priors Hall Farm products a few days later, I had a good "butchers" and indeed the Nice & Spicy's had not been in our pan and sampled by us to date. We needed to fix that immediately.

Priors Hall Farm's Traditional Pork are the benchmark that our other reviews are judged against, as the flavour, texture, bite and quality of the skins are what you would expect and should get with a proper sausage.

These Nice & Spicy's are 80% pork in decent quality casings with some chilli flavouring, in fact pieces of chilli were evident when we did a bit of slicing up once cooked. Cooked up these had a good bite and medium texture, and what's more the point, tasted sausage-tastic! The chilli is there for sure but it's been tamed so you get a superb flavour but without the stinging lips and for me the inevitable heartburn later!

Shrinkage and weight loss is minimal, and value for money is good.

I'd only cooked up half a pack so we could taste a few slices, but we were so suitably impressed with the taste, I cooked up the rest to rustle up some quick sausage sarnies! Grinning faces all round!

These are FAR BETTER THAN a "good everyday sausage", so you really must get some to try. See their web site (address below) for the farm shop opening times if you can't get these from your local shops. 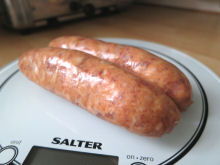 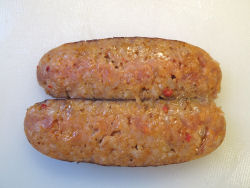