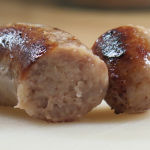 We've been asked a quite few times now about reviews of GLUTEN FREE sausages.  We have tried a few to date but I've not been that impressed to be honest, however we found some rather good looking porks in our local store from Priors Hall Farm so we thought we'd give them a go...

Now come on, 80% pork that's 100% British does sound good, yes?  Add that to what appear to be quality natural skins, and a good colour, they looked very interesting in the raw. Mind you, I said just before they went in to the pan that I hoped they were good enough to justify the extra cost per kilo which is somewhere near £1.30 more than that of the regular pork sausages from Priors Hall.

Priors Hall Farm sausages as far as we are concerned are still our benchmark that others are judged against, as their flavour, texture, bite and quality of the skins are what you would expect and should get with a proper sausage.

Well cooked up they did look cracking, nicely browned, with no splits or bursts.  Slight residual oil left in the pan, but this was minimal to be honest.  Medium texture meat, and reasonable bite, but we all said that there appeared to be too much salt for our taste.  Now the father-in-law will disagree as he still does salt on everything...but for us just a tad too much.  Now this is interesting as the chipolatas we tried from Priors Hall we thought they also had a bit too much salt...hmm?

The bread rusk/wheat flour is replaced with rice flour to achieve "gluten free" which, had we not known these were, we wouldn't have realised based on taste and texture.  However gluten free it would appear does come at a cost.  We suspect that increased production costs are to blame here which push up the price.  Price-wise at £9.23/kg, (accepting the fair bit of noted weight loss in cooking) make them quite expensive as far as we are concerned.

Would we buy them again, probably not.  They are an OK sausage to be fair, just not to our taste. 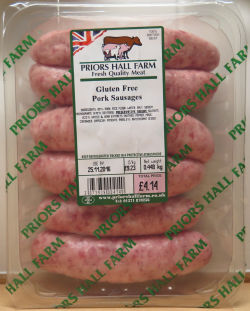 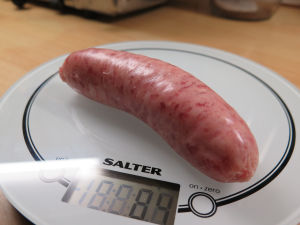