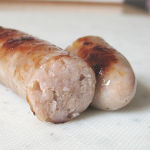 We've been sampling quite a few chipolatas recently and here's another LONG style chipolata, this time from Priors Hall Farm.

Not quite as long at 150mm as some we've tried and I suppose as there's no hard rule that says chipolatas have to be a certain length or diameter come to that, size then is ultimately really down to the producer.  The pack we bought had 13 (?) chipolatas within it to make a pack weight of 465g.

80% pork in natural skins is what we like, and we weren't disappointed here. The meat mixture certainly looked if it had been minced slightly coarser from the colour of the raw sausage. Incidentally we noted that the chipolatas had been tied properly before being packed. OK a bit of snipping with scissors for the pan, but not complaining as the skins were of good quality and the links separated easily.

Cooked up the skins browned well.  Agreed there was a little extra residual oil produced that may have come from a few little jets of hot meat juices that sprayed from the sides of the chipolatas as the skins tightened. The skins did however remain intact and we had no splits as such. There was however a little burnt residue on the outside of the chipolatas, probably from the meat juices that had leaked in to the pan. This was easily removed with a light scrape with the spatula though.

First impressions were that we had a top chipolata here, but on biting there was no real "snappiness" that we've come to like with chipolatas.  Taste-wise we felt they were slightly over seasoned with salt. Good spice but the level of salt did mask this to be honest. Perhaps it wasn't too much salt just the mixture needing more of a mix?  We made a note to get another pack, cook up and compare.

The texture though, was very good and in a sandwich with a touch of brown sauce we agreed they were absolutely spot on.

Price-wise at £8.87/kg, (accepting the noted weight loss in cooking) make them reasonably good value as far as we are concerned and certainly we would consider buying again...even with the slight salt issue! 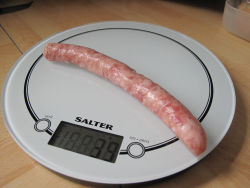 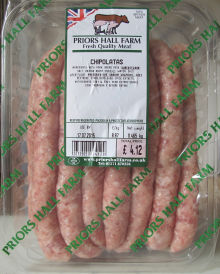