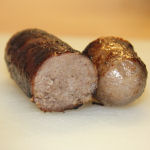 In celebration of the recent announcement of Newmarket sausages being awarded the Protected Geographical Indication (PGI) from the European Commission, we picked up some Powters Real Ales...

Sausages made in Suffolk have at last been granted a special status which puts them alongside the likes of Parma ham, Champagne and Melton Mowbray pork pies. It means only local companies can call their produce Newmarket sausages!

Obtaining these particular ones became a bit of a task though. No problem with obtaining them from Powters direct, but other stockists of these are a bit geographically limited.

70% pork along with 10% real ale (Greene King Abbot Ale) sounds like a perfect combination to me, and on cutting open the packaging the aroma of beer was just bursting to get out. In the pan the aroma was still lingering and giving the sense of smell a good old bashing! Just like summer barbeque time all over again!

OK quite a bit of spitting and dark residue in the pan but that'll be the beery moisture trying to escape, however these porkers are very succulent and have very good deep flavour.

The texture is medium, the skins are all natural, and the bite and chew MUST be tried for yourself...so very good! A bit too "beery" declaration was received from one of the team though, mind you her plate was cleared and nothing was left.

These need to be tried, as they're very different, so go on, get some. You wont be disappointed if you like beer and sausages!.