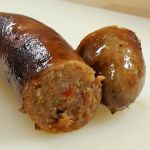 It’s been a while since our last published review so when I spied these Powters Chilli Pigs I thought I would rectify the situation. We like a decent chilli laced pork sausage, so we are going in...

It would be fair to say, Chilli Pigs, the 82% British pork, Spanish style offering from Powters of Newmarket are somewhat hard to find in our usual haunts. The major supermarkets just don’t seem to stock them locally to us in Hertfordshire. Well either that or they fly off the shelves before we get a chance to find them!

So, during our visit this year to the Bury St Edmunds Christmas Fayre, Powters had a stall and bingo!... 2 packs for a fiver!

The ingredients of the 6 sausage/400g pack include garlic, tomato, red & green bell peppers, rusk, along with some crushed chilli and chilli powder for what they call that “chilli kick”. British pork, with Powters own seasoning in “natural skins”, all from small batch production, sounds a real winner.  In fact Powters are quite clear about using only British Pork with no artificial flavourings or colours which is very good news.

I expect you may be like us and be a bit fussy about sausage skins though. We don’t like rubbery ones, the tough to cut and chew ones, the ones that just tear and rip, and certainly we avoid those “non-natural” ones. We know that some producers use the COLLAGEN style cases as they say the results of their production is more consistent. Ok, it’s their call, but not ours. We believe natural skins are the best to produce a decent sausage!

These chilli pigs in the pan browned really nicely with no splits or bursts. There’s natural skins for you! Mind you we did notice a little more oil in the pan after cooking than we would normally expect. Not excessive but noticeable. 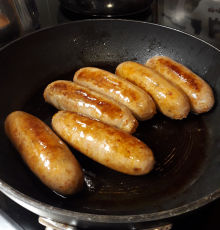 Now before someone moans about “you only pan fry in your reviews”, yes Ok we do but Powters do say on their packaging “For tastiest results”…Grill, Bake or Fry…with the recommended instructions…

So taste and texture was extremely good, with not so much chilli it takes your head off but just enough to give what Powters have described as “a moreish mouthful of big flavour”. We agree, they were VERY TASTY!.

The texture of the cooked sausage was about medium, producing a nicely firm product that had a very reasonable chew. Those crumbly sausages with very open texture do feel strange in your mouth. These were way far from that and produced a very satisfying sausage and mash…

Would we buy these again? Yes, if we can find them in store somewhere. Agreed we saw a bit of weight loss, but not excessive enough to cause alarm. The extra oil liberated from the sausage in the pan after cooking we suspect. We would definitely still but them again though...a decent chilli laced pork sausage!

Powters do have a delivery service at £3.33 a pack, however you need to purchase a minimum of 9 packs online to take advantage of it though. ! 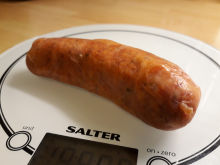 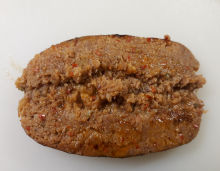 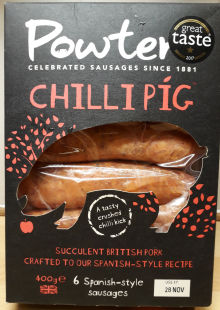