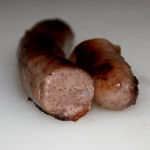 To continue celebrating the recent announcement of Newmarket sausages being awarded the Protected Geographical Indication (PGI), we also picked up some Powters Chipolatas...

Sausages made in Suffolk have at last been granted a special status which puts them alongside the likes of Parma ham, Champagne and Melton Mowbray pork pies. It means only local companies can call their produce Newmarket sausages!

Obtaining these was less of an issue than getting some of their big brother Real Ale ones as our Waitrose stock these locally. Other stockists of these can be a bit geographically limited.

70% pork in natural sheep casings and a good looking raw sausage. They cook up really well with nicely browned skins, a medium texture and a good bite. Flavour-wise though rather mild but meaty all the same even though they suffered quite a big weight loss at 22%.

The packaging says "quick-cook" but I'm conscious that making sure that they are properly cooked is essential. Slightly tanned on the outside is not probably cooked enough!.