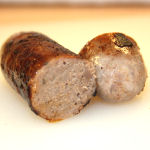 It would be fair to say that normally "low fat" indicated on packaging won't particularly excite us, as it might imply the contents have far less than what it really should have, especially to be a good sausage!...

Sausages made in Suffolk by Powters have a good reputation, so it is only right that we have a good look at these, and given the likes of some members of "WeightWatchers" having passed complimentary comments online about such, it is indeed our next task to sample the "low fat"!

Obtaining these was much less of a problem than we've had with some other of the Powters range of product. Most supermarkets this way do have them. Look out for the bright purple packets which I have to say are very obvious within the sausage section of the aisles we've seen them on. I suppose that most people specifically buying "low fat" would grill, but we didn't grill these for sampling as we wanted to compare like for like with our other samples, so in the pan they went...

The Powters packaging boldly says "Low in fat, high on flavour - each sausage weighs in with only 3% fat and just 78 calories"! Now if these can deliver on taste and texture, then lower fat content may certainly be interesting.

67% pork with natural skins sounds OK, and surprisingly they taste very good. There's a nice "herby" and spiced flavour, and certainly a very good medium texture with a slight crumble as you bite in to them. The skins brown well, not much fat left in the pan (with a slight darkish coloured residue agreed), but all in all certainly a sausage that works as a sausage should.

So if you want to cut down a bit on the fat you eat or you are watching your weight and want to enjoy food like you used too, then why not give them a go! After all grilling may even reduce the fat further, and you'll be surprised how good they compare taste-wise to full-fat ones! . 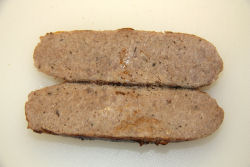 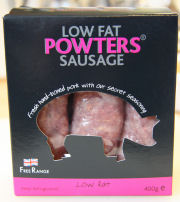