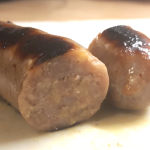 We have to give a prize to these guys for creativity. With the time of year upon us to go out and pick some sloes to start your gin infusions off, Churchgate launch their Pork & Sloe Gin sausages...

I was a bit sceptical about what actual taste this combination would achieve. Would it be sharp, or syrup sweet? Jason Drage said he's had quite a few customers saying good things about these, so the taste I suppose could be very acceptable.

With our sausage travels somewhat curtailed at present, I called in to the shop (on route to get our click & collect shopping as it happens), mask on and "one in one out wait your turn" to see what the score was on these particular sausages. I'd seen a post on Churchgate's Instagram page saying that they were actually using "Gordons Sloe Gin" as an ingredient!

After a quick chat, I just had to get a few to try. Mind you I had a some comments from the troops along the lines of "what have you bought, surely not?".

Well I put together a sausage and mash for our evening meal and appealed to the troops to just try them. Come on I said, these sausages follow the same recipe as the traditional porks, but with sloe gin added it would appear.

So it turns out it was a mistake unfortunately to try these in a sausage and mash. The troops didn't go with them as I would have expected. Too sweet commented one. I'm not sure another. Have you got any normal ones from another. Bother!

I must admit they did have a sweetness to them, which sort of overpowered or rather biased your tastebuds so you struggled to taste the pork. Very succulent and a good textured sausage cooked up.  It was a real shame as they are a well made sausage as like always from Churchgate, but this time something of a bit of an acquired taste perhaps. Given that, we're not sure if we would actually buy these again.

Rather expensive too compared to other Churchgate product I recall but I suppose using premium sloe gin does push up the making costs.

Worth trying all the same if you like sloe gin...but I should avoid eating them with a thick onion gravy.

Here's the sample details:
120x30mm before cooking, 120x30mm after.
87g before cooking, 75g after.
That's a shrinkage of 0% & weight loss of approx 9%.
I think they were about £7 for 6 but I've mislaid the till receipt unfortunately. I will update the price when I can. 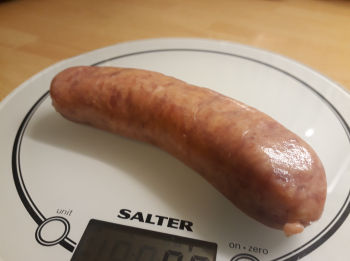