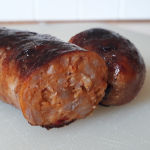 Yes we were perplexed too with this one!!  It appears that NDUJA is a spreadable, air-cured salami.  We did have to look this one up because as much as the "foodies" we think are here, we'd not heard of it...

The Churchgate Sausage Company are always pushing the boundaries when it comes to flavours and combinations they will try.  Creativity rules OK!

Jason Drage really knows his stuff about sausage making, and these sausages are certainly creative.  A year back, Churchgate came up with Pork & White Pudding which was a hit.  Hmm? White pudding is a spreadable meat, so, other spreadables would work?  We can perhaps see the train of thought here.

Nduja then, what's that all about?  It's a soft air-cured salami style meat originating from Calabria, in southern Italy.  Made from the same cuts of meat as slicing salami is made but it might originally also have contained some offal. Minced quite finely but still retaining a certain amount of texture, it features an abundance of very hot chillies, and is a very dark red in colour.  It can be used carefully in pasta dishes, soups and stews, or simply spread on bread.  Not that I would be tempted to try that to be honest!

From the look of sausage in the raw, they are quite dark in colour true, but also well filled and plump.  The natural skins looking good too.  We thought we would just cook them all rather than a couple to sample.  We pan fry all our tastings so with the pan coming up to temperature over a medium heat in they went.  A dot of oil as per normal.

The aroma from the pan was, as best described as, sensational!  Not too much residual oil after cooking remained which was good, but what oil there was appeared not surprisingly quite deep red in colour.

The cooked texture of what must be Churchgate's winning regular pork mix with the added salami "paste" just works.  Firm but very chewable, with a crisp bite from the well browned skins.  There's also, just like the Naga Chilli ones, a deepness of flavour, that really hits the spot.  And surprise surprise, also like the NAGAS, even after 2 cups of tea afterwards I was still unable to taste the tea..!

Really well made sausages, yet again!  However there's some "girlies" here that said "these Nduja's are a little spicy aren't they"...hmm?  You can't please some people....

Would we buy them again...definitely, especially at BBQ time in the better weather to come... 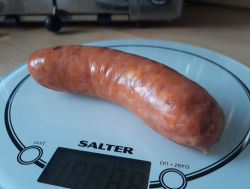 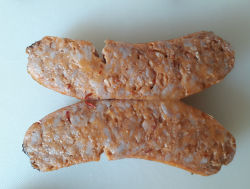