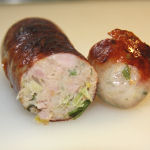 The "Leeky Streaky" is a proper top class pork, bacon and leek sausage from the Churchgate Sausage Company that we've been excited about...

We've tried other sausages with bacon, one we liked a lot, the other not so much, so how does this one compare?

Around 70% pork with 20% cured streaky bacon mixed in, fresh leeks (not that dried stuff) and some seasoning, not too tightly packed in to quality hog casings.  Even when raw they gave off a delightful aroma, but when cooking, even better.  A close tight texture (see the photos below) with a superb bite. The skins cook up and brown really well, and the taste...well...very succulent, tasty and wonderfully moreish.

You would think with 20% bacon on board that the saltiness of such would seriously hit the palette, but no, the salt is under control and the fresh leeks add texture and moisture.

Now don't worry that the cooked sausage looks a bit pink in the middle, it's not that it's undercooked, it's the quantity of cured bacon pieces.  The amount of leeks used also is something you can see from the photo, no scrimping on ingredients here then!

Jason Drage of the Churchgate Sausage Company certainly knows his stuff when it comes to sausage making. With over 20 years of sausage making experience, Jason has won over 20 awards for recipes he has developed, and the "Leeky Streaky" is one recipe you really must try. 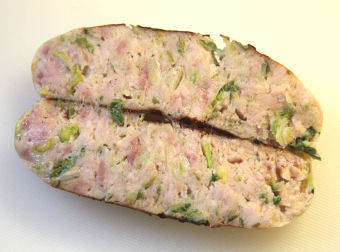