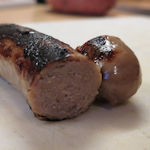 We've noticed quite a lot of interest in our reviews on Heck product, so here's another - Heck Plump Pork & Apple...

The other products we've sampled were Ok but it appears that Heck have made use of those collagen skins recently that to be honest we're not a big fan of, so it was pleasing to find these sausages with proper natural pork casings.  You can't taste "gluten free", so we'll take Heck's word for it...

85% British pork shoulder is a very good start, with pea flour (which we've not seen before), apple flakes (2%) and further seasoning all loaded in to what appeared to be quite good quality skins.  Not stuffed too tightly which is always good and allows the skins to tighten down a touch without splitting and bursting.

Cooked up the skin of the sample did brown OK, however it was quite fine and when cut didn't appear as crisp as we were expecting.  The texture was quite close too, perhaps minced a tad too fine we thought. Succulence was pretty fair on the pan fried sample, however we cooked the rest of the pack in a casserole/hotpot and the sausages became very, very soft.  The skins only just held the soft contents together so when cut the sausage tore apart.  The sausages were browned in the pan first then introduced to the hotpot to finish with the other ingredients.  To be fair most sausages we do this way do exhibit similar results, but these were particularly soft sausages.

Incidentally, I omitted the cider from the hotpot (although the package labelling recommends such), and just used vegetable stock.  This was a mistake as these sausages taste quite sweet, and the sweetness stays in the sausage rather than finding it's way in to the hotpot.  So as you eat you get the savoury hotpot taste and then you bit the sausage and you get a sweet burst.  A few comments received on this from the troops as they weren't too keen on that.  On reflection with a small drop of cider added to the stock, this would have probably made the whole dish more balanced taste-wise.

Commentary on the pan fried sample, for a factory sausage, these were pretty good!  A little sweet for me but given the price and the reasonable quality of product, not bad at all.

Would we buy again?  Yes...but next time serve differently! 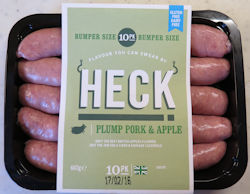 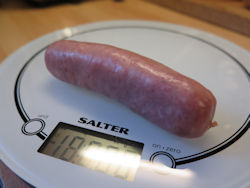