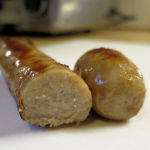 Yeah just like everyone looks like we were "involved" with the royal wedding...we saw the pack on the shelf at our local store, spotted the link (gingered haired prince...American lady hot as mustard perhaps?) and should have known better really...

Sausages with SWEET GINGER & AMERICAN MUSTARD that the packet says to eat with toast...TOAST? What are the peeps at Heck on? Oh! Missed that...Aah? Perhaps eat with "A TOAST"...ok ok...

So moving on, 85% British pork shoulder but yes they do have those collagen skins too which we love...NOT!  As much as we shouldn't be taken in with the advertising we bought a pack to try anyway.

Let's cut to the chase...OK they cooked up well, the skins browned and amazingly for these sort of pan fried samples they didn't split. The texture was good enough, and the collagen skins did cut ok without tearing, however the taste was best described as "weird"...very gingery with just a squeak of a hint of mustard...yes not something we would recommend to be honest.  None of the team were impressed...obviously then, a "novelty sausage"!

We should have a sign put up as a reminder in the Sausage Review kitchen..."AVOID THE NOVELTY SAUSAGE"

At £3 a 400g pack of 6 that's going to come in at £7.50 / Kg...hmm?  OK they may be Gluten Free and Dairy Free, and be made of reasonable quality and percentage of pork, but the taste is really strange!  Weight loss was a tad noticeable too. 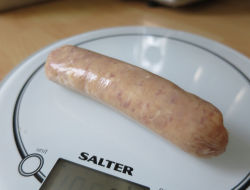 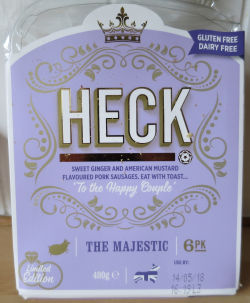