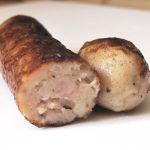 Looking for a low fat option for a change...we found these Heck Chicken Italia on the main sausage shelf at our local Tesco...hmm?

85% chicken content produced using British chicken breast and thighs with basil, toms & mozzarella. OK, OK I agree this sounds quite nice if honest, especially the mozzarella, but chicken doesn't naturally have much fat at all (hence the low fat labelling) so will these be a tad dry?

No doubt the recommended cooking method by the diet conscious would be grilling (which would produce even lower fat with the run off), so come on you know us, we pan fried these like normal!

Cooked up I was pleasantly surprised, the taste was OK. The thin sheep casings/skins browned and went snappy(ish). Dare I say the taste was better than I had expected, and not overly dry at all, but not what I'd call succulent. If we'd have grilled, they would have been quite dry I would expect. The texture however was "different" as these are chipolata size sausages, there's not a lot of sausage to bite in to and with the high percentage of chicken you either like the more solid mouth feel or you don't.

Again we'll take the producers word for being gluten free, and we note from the ingredients that there's no rusk, bread or similar included so that's good, but there is Milk (in the mozzarella) listed as a potential allergen.

Flavour-wise yes, nice, but I felt they lacked a bit of depth. Some more garlic in the mix would probably have perked these up a treat. 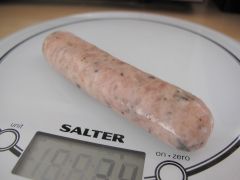 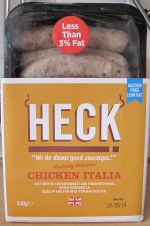 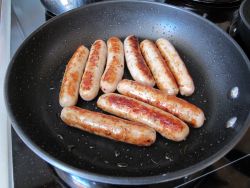