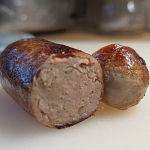 Now here's a thing, I saw these in our local store boldly tagged in the display as 78 calories, 3% fat and just 0.5 "syn points" - whatever that means?  We've tried Porky White's before and found them an OK sausage.  Well seeing these in "reduced calorie mode" we were intrigued. 75% British pork in natural skins, gluten free and low fat eh?

The packaging says leanest cuts of pork shoulder and belly, delicately seasoned and a lighter alternative to their big brother the Porky White's...and free from all that GM (genetically modified) stuff too so it appears!  In the raw they looked pretty good weighing around 65g a go and in a fairly standard size at 100mm x 30mm uncooked as it happens.

Using the recommended guidelines on the packet we pan fried (as we do all our sampling) and they cooked up really well with no obvious additional fat left in the pan. The skins browned nicely with no splits or bursts, but these Porky Lights did change shape somewhat. Noticeable length shrinkage along with some fattening up did occur.  Not that this fact is a show stopper of course but the fattening up wasn't consistent. Some samples fattened more so at one end rather than the other.  Odd?

The sausages did cut easily (we don't like tough skins) and the texture we found was just on the smooth side of medium.  Very succulent through out with nice spice and yes a lighter sausage to chew.  In a sandwich these a very good, but if you do, go easy on the sauce and let the sausage taste really work on it's own...

White's are on a winner here you know but what all this "syn points" business?  Well in a recent Guardian newspaper article they reported that Porky Lights evidently were not an immediate success, selling just 2,000 units a week as it happens. Then when Slimming World awarded the Porky Lights just half a “syn” on their points table for their dieters (regular bangers are some five syns), Surrey-based manufacturer G White’s reckon now they're shifting 170,000 units a week.

So looks like we'll be buying some more Porky Lights ourselves...I wonder what they'll be like on the BBQ?  As I write this review it's started snowing so as soon as it stops, we'll find out! 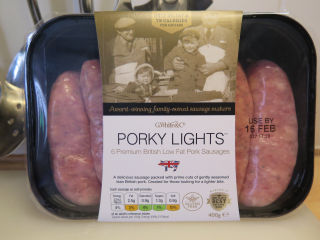 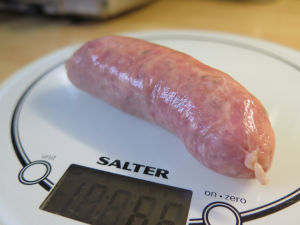 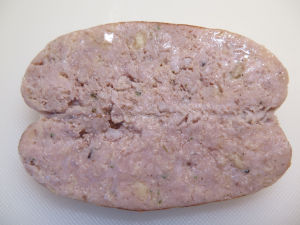 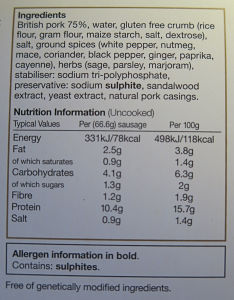