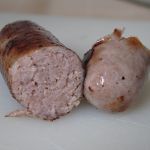 Theydon Bois village gets visited quite often by us on business but I must admit to having missed a bit of a change...Greens have replaced J. Phillips as the butchers in Coppice Row.

Mr Phillips evidently retired in August and Mr Green had taken over the business.  I'm told that the Phillips sausage recipes are being continued, but some new varieties will be introduced in the New Year.

75% meat at least, in good quality natural casings as before but the mix is minced just a little less to give it a tad more texture.  They still look very good in the raw I'm sure you'll agree.

Cooked up, they were still very good. Succulent and smooth to medium textured. A good bite and chew, and the flavour was, well, plain pork, just as it should be. The texture I think benefits from a little less mincing and yes Ok quite a bit of weight loss...but let's not berate plain pork sausage!  I like them... 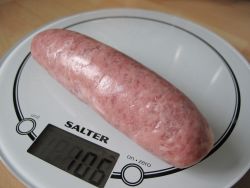