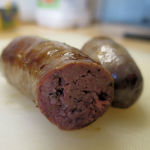 I was over at Theydon Bois a bit early for a business appointment and had parked up to wait.  I could see Green's across on Coppice Row...hmm?...I'll just have a look in their window I thought...Call it what you like I cannot resist buying a few sausages...We've sampled sausages from Greens a few years ago, and before that at the same premises from Mr Phillips, so it was about time to call in again.

What took my eye were some really dark looking sausages in the display...I needed to know what they were. They had the look of boerewors but not quite. Turns out they were made from local venison and containing a "secret ingredient"...I just smile whenever the butcher or maker tells us this...OK the mystique makes it interesting, but I would like to know what I am actually eating to be honest....

In the frying pan cooking up there was a really deep aroma and I suspect the mix may have included some red wine.  You know, I knew these sausages would taste very strong just from the aroma and I wasn't wrong at all as the taste was extremely bold and although a very satisfying bite and chew, I'm afraid they were way too strong for the rest of the team.

The texture was definite medium and the making looked very good in good quality natural skins but whatever the "secret ingredient" was it wasn't detectable to be honest.  Also with a massive weight loss of 28% that doesn't bode well.

Perhaps we'll be more careful in our selections in future for sampling as these with such an over the top flavour they almost spoilt our meal.  Apologies but there you go...they weren't for us. 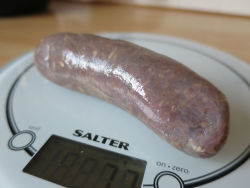