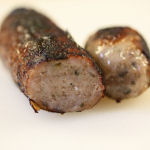 We had family round for a barbeque recently and the in-laws brought a contribution of some Broad Oak Farm sausages with them. They regard these as a "proper sausage", so not wanting to be ungrateful we gave them a go!

There was a bit concern that my barbeque cooking might put these proper sausages at risk as the skins did look quite fine, so we kept a couple back to cook and sample later.

On the barbeque they browned and cooked up really well.  Hardly any spitting and no flames from fat drip off at all.  It was noticeable that they cooked better than a few supermarket pork & caramelised red onion examples we found in a drawer of the freezer...as it happens the Broad Oaks on the barbeque were pretty good!

So how did they fare being cooked in the pan?

The skins are quite fine (beef protein) and even with the heat down we did unfortunately have all the skins split. This was less evident on the barbeque so it leads me to believe that the extra oil in the pan over softens the beef protein casings.  The splits to the skins weren't anything other than cosmetic really as the contents stayed put around what is a reasonably firm sausage for only containing 65% pork meat.

Texture-wise they were medium/smooth, but the flavour is big and they have a good lingering after-taste as you would expect from a cumberland.

In a sandwich, they were very good...

Yes, we agreed that Broad Oak Farm cumberlands are a proper, no nonsense, sausage just like the in-laws suggested.  (Mind you, I would never openly admit to the mother-in-law that she was right though!) 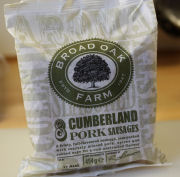 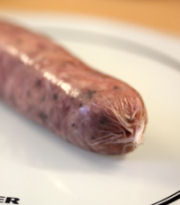