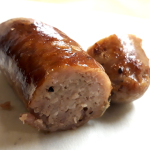 I called in to see friends in Norfolk and they said that there was a very good farm shop and butchery not far away at Walpole St. Andrew (nr Wisbech) that I really should visit before I left for home. They had heard that the sausages to get there were the "Frank" ones. I was confused but I don't need too much encouragement when it comes to sausage purchasing!

Samuels have their business on Market Lane between Walpole St. Andrew and the A17 Kings Lynn. It would appear that they are the proud keepers of a secret sausage recipe past down through generations at Wisbech’s well known G.W Frank’s market place butchers. It was evidently a fear that the recipe for these tasty bangers would be lost when that family butchers closed after over a hundred years of trading. Samuels are now proudly producing GW Frank sausages to that very recipe to continue the tradition.

In the raw they are a good looking sausage, and cooking up they looked even better!  No splits, bursts or fat run off. Simply lovely. The butcher I spoke to said he would be happy with us saying approximately 82% quality pork goes in to the mix, and although he was chatty about the making with quality skins, with rusk not bread crumbs, and you won't get any of that white fatty stuff out of these sausages, he would not be budged on revealing what the actual recipe detail was even though I thought I'd encourage him by additionally buying a fresh chicken, some pork belly strips & chops, pork pies, scotch eggs and two packs of bacon!  Well, I tried, but what can you expect? It's a secret recipe...

Excellent quality natural skins that when cooked cut nicely and allowed you to chew the meat rather than the skin.  We liked these, a lot!  Texture-wise we'd say on our samples, just under medium. A really spot on bite and chew with what could best be described as a very slightly salty with almost a touch of bacon flavour perhaps. Now I had originally put this down to seasoning, but another review I read suggested that there may indeed be a smidge of bacon in the mix.

Well "whatever" as they seem to say, these are "proper" sausages trust us with an excellent old school taste.  We've tried them straight from the pan in a sandwich, and again with mash, onions, peas and thick gravy which was good for us too...and our friends said they worked really well in a sausage toad.  So without banging on about it, you really should try them yourself and perhaps let us know your thoughts...

Not bad value either for a proper good sausage. Around 55p a banger is not too dusty at all!

So, would I buy some more of the GW Frank sausages (and GW Frank recipe pork pies) from Samuels?  Too blooming right I will, next time I'm Wisbech way I'll make point of it! 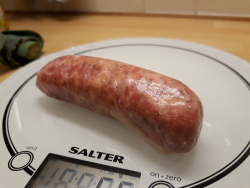 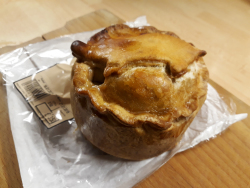 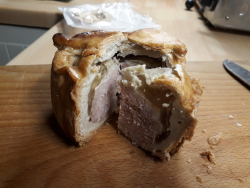 Update: I will admit to personally being rather partial to these sausages, so when a few weeks later our Norfolk friends (Sandra & Frank) said they were going over to Samuels to get a few packs and then kindly planned to drop one in (FOC) to me when they were passing Sausage Review HQ, I simply said "Yes Please!" 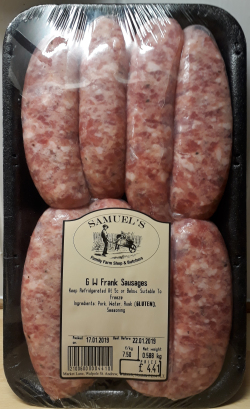