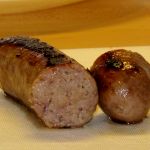 I had an appointment to see clients locally and happened across Kings in Lowers Street. It was late and the window display was virtually clear. "Have you any pork sausages?"..."Of coarse" the response...

Now these porkers are made in the shop with 80% Gloucester Old Spot pork meat we are told, in natural skins and do look pretty fair in the raw. Sorry no photo this time. (Note to self: remember to photograph the raw sausages BEFORE cooking....doh)

A sizeable sausage at around 130mm long and weighing in at around 108g (just under 4 oz old school) a go! Allow only two per serving for any super hero was my thoughts at the time...

Cooking up we did see a little pale ooze from the sausages which although ran clear after a short while did caramelise in the pan and unfortunately stuck on to the skins. Shame. However on the plus side, no splits or ruptures of the skins.

Quite a bit of weight loss at 16% was noted. Shrinkage was moderate at 7%. From the photo when sliced you can see quite an open loose texture which was OK, but the skins were a tad rubbery. Very succulent and quite a good chew though.

A good taste but call us fussy, we'd prefer a tad more seasoning. Eaten cold later on, not bad at all! Price-wise reasonable and no doubt we will go back to try some of the other flavours.

Would we buy these porks again? "Of coarse" ! 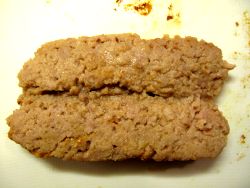 You may also like to see:
King's (Stansted Mountfitchet) - Pork Chipolata