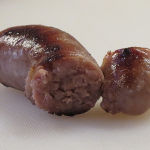 A couple of bags of sausages arrived the other day from our Norfolk outpost. Dropped in by a mutual acquaintance for us to sample as it happens. Thank you all. Free sausages are always welcome but do these Swaffham Sizzlers pass muster?

We were told that the pork in these comes from “Scotts Field” near Oxburgh Hall, from a herd of rare breed, Large Black, free range pigs. Although rare today, the breed is indigenous to East Anglia and the meat produced is renowned for being flavoursome with a succulent texture or so their web site says.

“Blimey”, eyes down and look in was uttered as we separated the sausages up ready for the pan.

We didn’t get the meat percentage unfortunately in time for writing the review, but I’m sure 65-70% would be a suitable figure. Good looking sausages in the raw though, good natural skins and not too tightly stuffed.

Now in cooking up, there was an issue unfortunately. The skins were, we found out in cooking, very fine and a few bursts occurred. Not splits, bursts. Only minor but enough to allow the soft uncooked filling to protrude, swelling through the sides on more than one sausage. I had cooked up a couple for sampling, but in light of the bursts, we cooked up the remainder, just to check. A few more bust sausage skins did occur as it happens sorry to say.

Well the sausages did brown very well anyway, and looked pretty fair ready for dishing up. However the bite was very soft and the texture oddly squidgy too. Comments here on the meat texture included “they’re rather soft”, and “sticky meat is strange”. Personally I found them somewhat lacking, being in need also of a lot more seasoning. Quite noticeable shrinkage and weight loss.

Having contacted our Norfolk outpost for their spin on the sausages, the comments from there did confirm that these sausages were indeed very soft, but very good for a sausage toad evidently! Oven cooked in a toad, sausages do sometimes cook up a bit firm but these Swaffham Sizzlers remained soft.

I kept half a sausage back to eat when cold, and although it had firmed up slightly, it was still pretty soft to bite and desperately in need of seasoning.

So there you go an OK sausage, but sadly not our “cup of tea”. Give them a go yourself and let us know what you think…. . 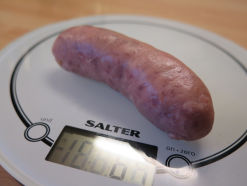