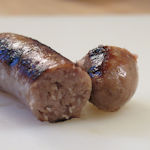 Our Norfolk outpost arranged for a mutual acquaintance to drop-off a few sausages for us to sample. Thank you all.

Like the Swaffham Sizzlers, were told that the pork in these comes from “Scotts Field” near Oxburgh Hall, from a herd of rare breed, Large Black, free range pigs. Although rare today, the breed is indigenous to East Anglia and the meat produced is renowned for being flavoursome with a succulent texture or so their web site says.

We need to contact the producer to get the accurate meat percentage, but I’m sure 68-75% would be a good estimate. Good natural skins. Firm in the raw but not too firm.

In cooking up, the skins worked as they should.  No splits or bursts at all, and none of that annoying pale emulsion leaking out that we get with some sausages.  Nice browned skins with a little crispness...looking good so far we said.  The aroma from the pan was "sausagey" commented one of the team...I do wonder sometimes?

Texture-wise a good medium with a slight crumble when cut. The succulence was Ok but on the low side even with pan frying.  I suspect if these sausages were oven baked or grilled then they would come up a bit dry-ish.  Taste-wise there was definitely enough "porkiness" and spice to just give you that lingering flavour on the tongue.

Weight loss was reasonable, and shrinkage was 0%.  Having contacted our Norfolk outpost for their spin on these sausages as well, the comments from there were like ours and complementary too.

Like the Sizzlers I kept a sausage back to eat when cold, and although it had lost a bit of flavour, with a dab of "daddies" this produced a handsome sandwich!

So the bottom line, a pretty fair sausage that we would happily buy ourselves.  Give them a go yourself and please let us know what you think… 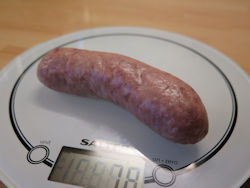