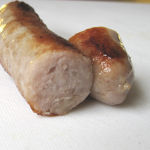 Sausages just turning up here at sausage central is not that unexpected but today was something different...a big name in disguise?...

I was presented with a pack of Budgen's own brand "discover the taste" pork chipolatas and what I didn't realise was I was being tested...by my own troops!  Now they wouldn't let me see the back of the packaging which did make me suspicious, but hey, sausages to taste...get the frying pan!

Well the chipolatas cooked up really well and I was honestly, suitably impressed. Really well made sausages with good taste and lingering spice on the tongue just how I like them...slightly "snappy skins" ooh err!

Eaten later when cold, they were really good too.  For an own brand supermarket sausage these chipolatas are very good quality produce.

The troops did eventually reveal the full packaging and said that the chipolatas were made for Budgen's by a Surrey company established in 1935...with a chairman called Graham White...

Hang on a moment.....Porky White's of Surrey was established in 1935, and the chairman is a Graham White!  Well there's thing...

Would we buy again?  Well if I can't get proper Porky White's Surrey Chipolatas, yes we would...but at £9.70/kg they're a little expensive, so I'd rather buy the Porky White's really... 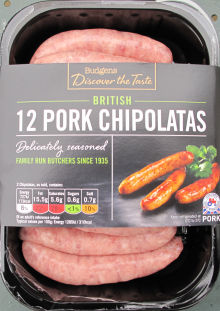 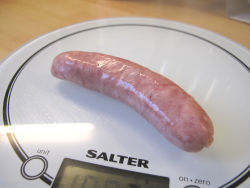 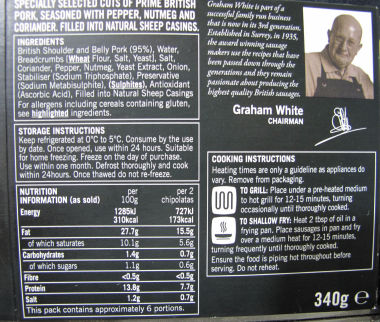 You may also like to see:
Budgen's - Sweet Chilli & Lime