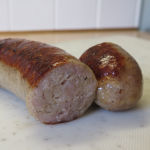 We called in to Brookfield Farm Butchery after friends from Dane End, Hertfordshire, raved about the excellent produce specifically their sausages, but did say we may need the sat-nav if we were thinking about visiting the farm shop...which we did, as the farm shop is tucked away somewhat on the quite narrow Aston End Road, Aston, Stevenage.

As you get closer it would be worth looking out for the water tower and don't get concerned about access, as there's ample parking opposite the shop.

We tried the excellent HertBeat sausages in another review, and these Boro sausages looked good too.  They were judged runner up to the HertBeat and awarded a Legendary British Banger silver in the same East of England Legendary Banger 2011 competition.  Boro is named such evidently as a tribute to the butchery's local football team, Stevenage Borough FC, containing 75% own pork and a mild blend of herbs and pepper. Quality natural skins again and all the makings of an interesting sausage!

Cooked up the skins browned well just like the HertBeats and no nasty splits. Splits make for a less attractive sausage, come on, what's the point of putting the meat in to skins if it bursts out?  Again the sausage cut easily without the skin tearing, and revealed a just under medium texture.  Lovely succulence.

We really liked these, and we would place them equal to the HertBeat this time.  A good looking and tasting sausage with minimum shrinkage and weight loss in cooking. You know the quality of the pork from Brookfield's own pigs is top notch. The pepper is there and gave a little buzz, but the level of salt was a tad higher than we would have liked.

Eaten cold later, "the business"!    So it looks like we'll be buying more of the Boro and the HertBeat bangers, and OK, we may try their best sellers, the Astons next time!

If you do get over to Brookfield Farm sometime and try both, why not let us know what you think is the tastier sausage! 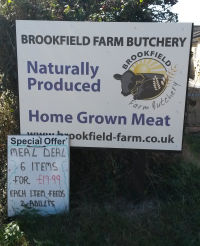 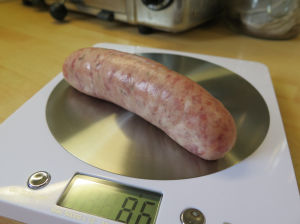 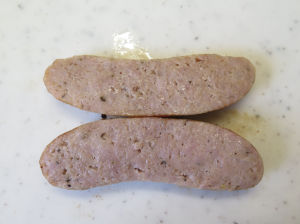 You may also like to see:
Brookfield Farm (Aston) - HertBeat 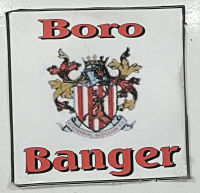