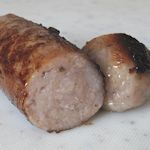 We were at the Essex coast for the day visiting friends and whilst out for a walk, dropped into the Sunday market at St Osyth...hmm a mobile meat shop...sausages perhaps?

Now my wife calls it obsessive behaviour, but I don't when it comes to hunting out varieties of sausage.  We're on a mission after all, "So what have you got today for sale my good man?"

Well, some Pork & Apple (and some Pork, Chilli & Garlic...about which we'll do separately as they were much better) for a very good sale price, went in to the carrier bag.  They certainly looked good in the packaging, and when cooked up on the BBQ, not bad at all in a roll with "summer slaw" dressing, followed by a glass of Doom Bar.

OK we did use them entirely for a BBQ as I wanted to get the troops and others feedback on them.  When I say not bad, they were OK.  Not a lot of apple flavour though, and the texture was on the smooth and soft side, good skins albeit quite fine, but I suppose an OK sausage never the less.

The labelling indicated 52% pork, 10% pork fat, pork rind, dried apple and some soya flour and soya protein plus plenty of E's, yes OK not the makings of a premium sausage agreed, but at "today's sale price" of £5.00 for a 14 sausage 857g pack, what do you expect!

The natural skins did brown nicely, a few minor splits but none of that annoying creamy stuff leaking out which does make a change.  Minimal shrinkage and weight loss...

The bottom line...sadly nothing to write home about. 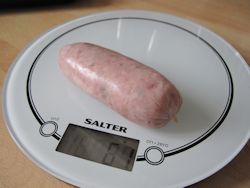 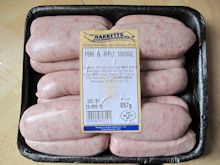 You may also like to see:
Barretts - Pork, Chilli & Garlic