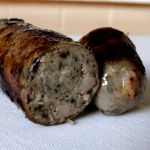 We don't consider ourselves shopping snobs.  My kids used Aldi while they were both at uni to save a bit, so as Aldi have opened a store near us, we thought we'd give them a go ourselves...

Well this isn't a review of the store, so I'll avoid the commentary other than on the sausage products. Not a bad selection of different flavoured sausages on offer.  All pre-packed of coarse, but nethertheless, all looking tidy.

As a start I thought we'd try the "Specially Selected" - Lincolnshires which in the raw did look very good. British pork (100%) with both Red Tractor and Freedom Food marks which did give some confidence of product. 89% meat content with breadcrumbs, and the flavourings you perhaps would expect in this type of sausage. (Sage, parsley, marjoram, basil, chives, rosemary, thyme etc...)  All Ok so far then...

The pack had cooking instructions for shallow fry which is how we test samples but it suggested over a medium heat for 10-12 minutes ...hmm...I'd give them a few minutes more to be honest.

Cooked up the skins browned well but we did see a trace of that pale ooze in the pan which we managed to push off the sausage so it didn't stick to the skins and burn.  A small increase in residual oil in the pan showed that these had given off a little fat in cooking.

The sample however did lose a noticeable bit of weight although size-wise, not a lot! . These sausages had a medium firm bite with a fair good chew. Any "soggy breadiness" was as far as we were concerned under control and the texture was we'd say medium and although the packaging states coarsely chopped pork, what is and how much is coarse?

The seasoning is very good.  Not over the top with sage, and we'd say a balance with the other flavourings.

Would we buy again...yes.   Not bad at all as an everyday sausage. 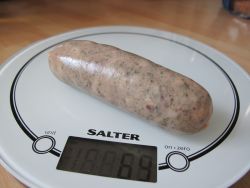 You may also like to see:
Aldi - Sweet Chilli