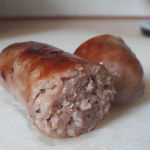 So yesterday I needed to visit a customer in Braughing (yes, that would be the place where the famous Braughing sausage from Whites originated from) and as the A120 from Bishops Stortford was snarled up with road closures yet again, I went "cross country", well hardly off road, but you get the drift...on route, driving through Standon high street...aha what's this then?

Steve Wilde's shop is tucked away slightly off the beaten track just along from the Star pub, nearly opposite St Mary's Church in a rather nice village setting.  The shop was open and I managed to park just outside and peered through the window. A few locals were in just after opening, so that looked positive. I had made good time and was quite early for my customer, so let's use the time and buy some sausages I thought. Might get some bacon too!

With the locals still in the shop I didn't want to seem too much of an "anorak" asking questions so I thought I'd purchase this time and we'd do a blind tasting, then I'd call back to the shop at a later date and get more information then.  Nice looking sausages in the raw though, so when in Standon, get the Old Standon ones!

So what's not to like about locally made sausages?  Good question.  I'd read on-line something about "sausage psychology" and the notion that sausages evoke strong emotional ties to childhood, memories of favourite comforting meals such as bangers and mash, happy family occasions such as weekend or holiday breakfasts cooked by Dad!  I have to say I totally agree.  Mind you the trip to the local butchers I'm told when I was, well, in a push chair, so 4 or 5 years old, and the butcher giving me a raw chipolata sausage to chew!!!!  You just wouldn't dare do it these days I'm sure...

These Old Standons, look very well made.  Good natural skins, the mix looks well minced and filled, and all very slightly different sizes, so hand made and hand tied old school style!  We can't comment yet on the source of the pork used but given the taste and texture when we cooked these up, we're sure that Steve Wilde sources his pork from a good quality producer.

We mark our tastings on not only the finished sausage on the plate but what it does in the pan too.  These coloured up really well and the skins tightened and plumped up up nicely without splitting or bursting.  A small eruption from a couple of ends where the skins had been cut a bit close though, but that may have been us as they were mainly a string prior to going in the pan.

So 10% weight loss and 15% shrinkage, plus not anything noticeable residual fat-wise in the pan? Not too bad.  Texture-wise, slightly crumbly, but not so open that they fall apart though.  Slightly crispy skins with a fair bite and a good chew.  And the taste?  Well we had anticipated something strong and bold doing a blind tasting, but they tasted just like an old style traditional sausage with perhaps just a touch of pepper. Perhaps that's the whole point. Hmm? I must call in to the shop when next I'm passing.

Don't get us wrong, a good tasting sausage all the same.  Would we buy again...of course.  These could be a contender for our preferred "everyday sausage"! 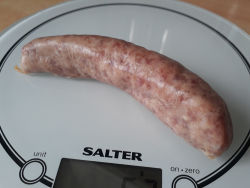 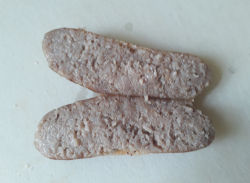 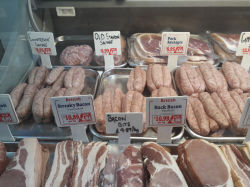 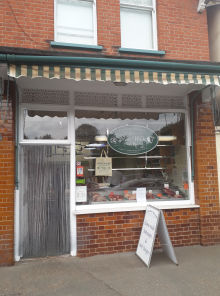