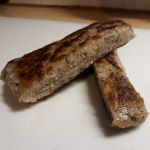 The nice people at Cottom Foods sent us a few samples to ask what we thought of the square sausage...and immediately caused a stir!

You know we've been sampling sausages in our journey for some time now, comparing, discussing, scoring, enjoying and the like, but how do you really compare these "Clever Cumberland" square sausages to other "regular" shape ones?  These square ones are different we will give you that, and quite versatile as it happens!

Looks like the Scottish press previously dished out some stick along the lines implying that Cottom Foods were claiming to have invented the square sausage when the square Scottish "Lorne" sausage has been about for centuries...really?...copyright on square sausage?...whatever...so leaving that aside let's consider what you get meat-wise, compared with regular shaped sausages.  From what we can see each square is roughly the same weight as a regular porker so an equivalent to "4 to a pack". We are talking GLUTEN FREE product though, that's 65% pork so that's pretty good we think you'll agree, OK on the face of it not a very high percentage, but acceptable.

Now cooking...disaster darling...our testing pan is round so we can only get 2 squares at a time in it...so we recommend using a square grill pan for these so you can get 4 in at a go!  Now remember each square equates to one regular sausage...don't know about you but personally I eat two bangers as my portion, so 4 squares in a pan will probably only do 2 people!  Break out a second pan... 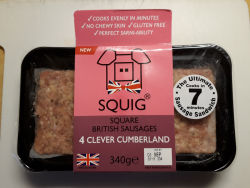 The claim is that this product cooks faster than regular sausages...well we totally agree.  The packaging indicates when pan frying, 4 minutes one side, turn over and 3 minutes the other.  We did 4 minutes each side just to make sure...and timed it on a stop-watch!  Piping hot throughout and very little, in fact next to nothing, fat wise came out of the sausage in to the pan AND very little weight loss in cooking.  We would expect grilling to also produce a good result, and the cooking time would no doubt be reduced too.  We didn't consider measuring each square to check shrinkage as we normally do...a square is a square!

Use straight out of the pan in a sandwich, or on the plate as you would regular sausages.  Mind you one of the team insisted the square sausage was cut in to strips to resemble chipolatas before she'd tuck in! There's always one!  Successfully tried on a BBQ, and they worked well, but care is required, they will be thin enough unlike the porkers to slip through between the grill bars!

Taste-wise the Clever Cumberlands are wonderfully "peppery".  You get a brilliant buzz on the tongue, and although being modestly thin, still holding some succulence. The texture is firm which courted remarks like "this a rather like a pork burger patty" which I suppose is close to the truth but if it wasn't I suppose it would crumble in the pan or break on the BBQ?

Nan & Granddad (We are 90 you know!) liked them too, very much as it happens, so you heard it here first.  They also suggested (as they are very creative) using a square with pastry wrapped around as a sort of mini sausage pie. They even suggested using the Clever Cumberland sausage as the coating to make a Scotch Egg...I suspect if we'd been nearer Christmas, a square may have found itself even inside the turkey!

We also tried the PERFECT PORK version of SQUIG alongside the cumberland, very nice plain pork, similar cooking performance but we felt it was just a tad under seasoned.

BUT, if it's only a shape we are buying, then 2 regular bangers sliced length-wise, do fit perfectly in between a couple of slices of bread.

The price for this product is very fair, £2 for a 340g pack from Morrisons...definitely worth a try? 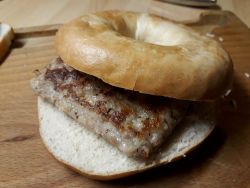 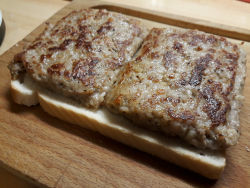 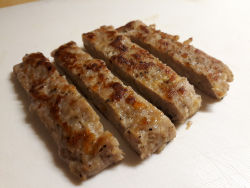 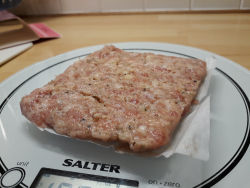 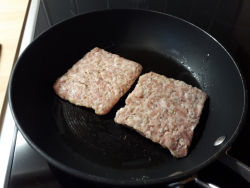 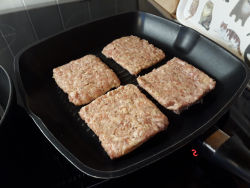