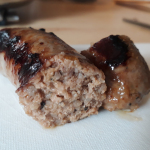 So here's the way it works, you do some house restoration work for a friend and you get your thank you paid in sausages!...

Well that's the gist of it, but to be honest our friends of many, many years, moved house to Thorrington in Essex, and they needed some help in restoring their 16th century farm house. So whilst I was repairing a very old beamed ceiling, they were going leave me up to my arm pits in plaster and scrim to pop in to St Osyth for shopping. "Are you going anywhere near Brightlingsea?" I asked. "It's only 10 minutes" they said. "We suppose you want sausages from Smith's?" they added.

Can't imagine where they got that idea from? I mused.  "Well if you are going, yes please!" was my response.

Suffice to say 2 bags of sausages arrived magically later in the day.  Well there's a thing...

We normally would buy our sausages for our reviews, but we don't like to turn down opportunity when I have worked for it after all.

Smiths of Essex Ltd have a small shop in the coastal town of Brightlingsea, which is not that far from Colchester.  The Dragon Sausages we tried previously were top notch, so, Minted Lamb, hmm?

These minted lamb sausages were in a full sized skin too just like the ones we tried earlier in the year which surprised us as you usually see chipolata sized lamb sausages more often than not!  OK OK no complaints honest! However, the sausages in the raw were noticeably very soft and the natural skins a bit baggy.  Hmm?  Perhaps the skins will tighten up as they cook I considered?

I was correct they did just that but the sausage texture was way disappointing. The meat filling was very very soft. The texture was very open and loose unfortunately.  This was a bit of a shock really as we'd taken care to cook them consistently the way we normally do, yet these sausages tore rather than cut on the plate. Weight loss was very high at 28% and quite a bit of oil remained in the pan.  Flavour-wise yes minted lamb but the looseness of the filling detracted badly. Shame.

We don't like to appear to dis freebies, but we do think we need to be honest about our reviews too.

We'll plan to pickup some more when Smith's have some and re-sample. 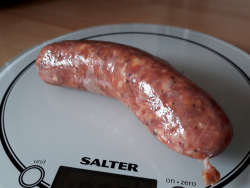 You may also like to see:
Smiths (Brightlingsea) - Dragon Sausages