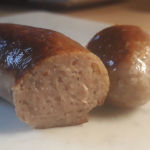 Reviewing our local butchers and suppliers produce more often rather than travelling about has become the sort of "new normal" whilst our movements are somewhat limited with the lockdown restrictions BUT we know that "porks" from Simon Dennis are something of a local staple...

We last properly reviewed these sausages in February 2015, mind you, we and family members have bought and enjoyed these on many other occasions too since.  Simon's shop has been open right through, although on shortened opening hours and operating a "one in / one out" policy (as to be expected to be honest, it's a small shop).

Simon produces what we like to call "proper no nonsense" sausages. Consistent quality ingredients and care taken in the making. Still 75%+ meat, not too tightly packed skins, just how we like them here, and of course in natural skins. The pork mix is we think minced just a little finer than we've seen before in these which we prefer to be honest. Simon says he's been making sausages for more years than he cares to remember and really knows how to make them. No doubt he knows what works best...

Cooked up the sample lost very little in weight. No residual fat left in the pan to speak of with the skins browning well without bursts and major splits, and giving a medium firm bite with a pretty good chew. The texture has changed very slightly and is now more smooth than medium, which again we do prefer. It would be fair to say that the "small sausage" title would have been a good description for these previously, but we've also seen a change to the size going from a 90mm up to now 110mm.  These are definitely "large porks" now. Seasoning is still spot on though and we have just enough lingering spice taste on the palette after eating which does make for a pretty fair foodie experience. Some may refer to these as "plain" pork sausage but they are far from plain, trust us.

Price-wise these remain very reasonable. In comparison with our previous review, I believe they are same price per kilo as previous although I will check again as we purchased this particular sampling in amongst quite a large order of other produce to restock the freezer.

Eaten cold later on, we'll go with what we've said before, they're spot on. Try these in a sausage toad, sausage casserole or better still as a sausage and mash! 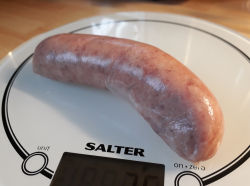 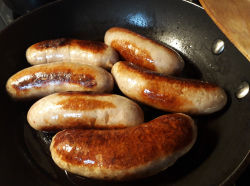 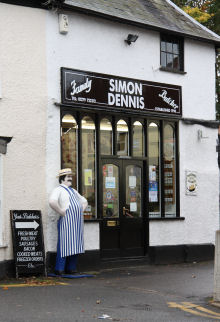