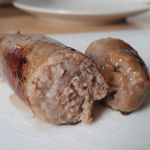 I'm a soft touch when it comes to buying produce at Christmas markets, and low it came to pass, verily at the Bury St Edmunds Christmas market I bought a few packs of Samphire sausages for the freezer! I suspect the last time we sampled the Samphire Pork & Mustard sausages was as a result of a similar purchase in 2015!

Samphire is an award winning smallholding in Norfolk (near Diss) that rears rare breed pigs and sheep. From their web site (linked below) and a piece in the BBC Olive "Food Hero's" magazine we see that all their pigs are pedigree rare breed (Gloucester Old Spot and British Saddleback), and 100% completely free range. We also read that Gary Rhodes (of TV chef fame) had previously said the sausages he tried were the best he'd ever tasted.  So with statements like these, it would be a major failing not to try these 83% pork and mustard sausages, once again now wouldn't it?

Pork and mustard remains a favourite flavour combination of mine, and if correctly seasoned can be a lovely tasting sausage.  The troops here do like mustard, but are still a bit fussy it seems to which kind of mustard.  As the label still only says mustard flour and mustard seeds, it's difficult to determine exactly what's been used here.

The natural skins looked good, although very fine in the raw, nicely tied and the colour of the meat inside certainly looked appealing. Cooked up (pan fried in a tea spoon of oil as usual for all our tastings) the skins certainly behaved OK with no major splits or bursts, browned very nicely but the skins where cut a bit close did shrink back.  Last time we noted there was a bit of noticeable lengthwise shrinkage making the sausages appear to be somewhat "dumpy" in the pan but not so we would comment on this time.  Weight loss at 15% and shrinkage at 5% is an improvement on the last sampling, also we note that the raw sausages are slightly increased in length from 90mm to 100mm.

The texture was on the soft(ish) side, minced just finer than medium. and the succulence was pretty good. A good bite and pleasurable chew. The quality of pork is there for sure and taste-wise I still liked them, but the troops said again that the mustard taste wasn't the same "spice" as say a shop mustard would give, so we're not sure if everyone will like these. One of the troops produced a pot of Dijon from the fridge to prove the point...sorry about using that but no Coleman's English was mixed up...

However that aside, a good well made sausage, albeit still a bit pricey at £10.50/kg which keeps these in the premium sausage territory.  Again we're not wanting to appear to be knocking the product, as we know production costs need to be covered.

We tried them ourselves with buttery mash, onions, peas and thick gravy...with which they worked pretty good...and with the second pack...they worked really well in a sausage toad.  You really should try them yourself and let us know what you thought... 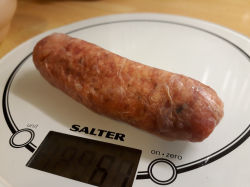 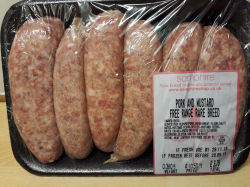 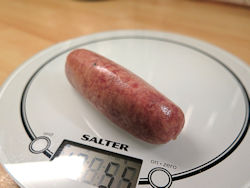 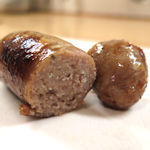