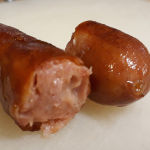 A Christmas/New Year thought from a friend of one of the troops bought these rather interesting sausages to SausageReview HQ. After a quick Google Translation of Käserkrainer..."cheesecake"...hmm not sure about that translation at all!...

Radatz was founded by Franz Radatz (Senior) in 1962 in Karolinengasse, Vienna. From their web site, with a bit of translation by Google Chrome of course, we see they do have quite a few awards and press plaudits about how good their produce is. The web site goes on to explain the Käsekrainer (developed by Radatz in the 1970's) is a sausage made of slightly smoked, coarse pork meat, in which small cubes of Emmental cheese were incorporated so combining a spicy meaty taste with the aroma of melted cheese. During cooking, the cheese forms a delicious crust, the "Käsefußerl". They claim that every year around nine million Radatz Käsekrainer are eaten in Austria! After tasting our samples of their mini Käserkrainer, I tend to see why.

Now we definitely don't, and many British sausage manufactures won't recommend either, puncturing the skins of sausages before cooking for the reason that juices escape, however Radatz beg to differ.  The Käserkrainer skin is intended to be punctured, and not just by a little, so when you do watch the video clip, you'll see them using a sharp 3 pronged tool, and just by how much they go at it.

You see the point of the puncturing seems to be to ensure the cheese (Emmental 16%) melts and flows from the sausage to create this crust underneath to enhance the flavour and taste. It also by the way stops the escaping jets of molten cheese from burning your hands and arms when cooking...we found out the hard way!

So 81% pork and beef, with 16% Emmental cheese, bacon, spices, natural aroma, we suspect liquid smoke (beech) although the skins do look smoked, plus the necessary antioxidants, all in natural skins (sheeps).  All made to exacting Austrian Food Code Standards (...may contain traces of mustard and celery!)

These "mini" version of the larger Käserkrainer sausages I'm sure will be the same quality and recipe, just in a smaller retail shrink-wrap package.  If wrong I'm sure somebody will let us know!

In the pan, without the puncturing, well yes, jets of escaping molten cheese did appear, and yes it hurts when landing on the bare forearm, but you live and learn. The aroma was interesting with the keen smokiness and cheese of course!  So when it comes to tasting (if you haven't punctured them sufficiently) we'd recommend that you BE VERY CAUTIOUS!  Some of the molten cheese remains in little pockets within the sausages, and one on a fork from the pan and bitten, like you do, will result in blistering in your mouth!

We liked these, although they are quite on the salty side, probably from the added bacon, but with the cheese there seemed to be a balance of flavours, and these did eat very well. A firm -ish bite, and chew. Texture-wise the meat (the cheese I suspect is added to the mix afterwards) is not overly minced and retains quite a succulence. Obviously the cheese imparts something to this.  The team however generally liked them but had a few reservations, one being the smokiness/saltiness that not all of them preferred.

Shrinkage and weight loss was minimal, and would have been less had we watched the video about puncturing the skins and avoided a small proportion of cheese being lost out of the pan.  Not cheap at £12.30 / kg retail online though, with a minimum £6 delivery cost...!

We ate our samples with a quick sausage and mash, and I could have personally eaten a few more. Perhaps in a roll with some additional chilli oil/sauce that came with them may have been better for some of the troops? (Note to self: buy some of the full size ones for the summer BBQ)

All in all, not a bad sausage for a "foreigner" (or auslander) and would be something I'd definitely buy. Incidentally they list these as Gluten Free & Lactose Free too if you are interested.  You could get your sample online from somewhere such as www.piccantino.co.uk where I think our pack came from. 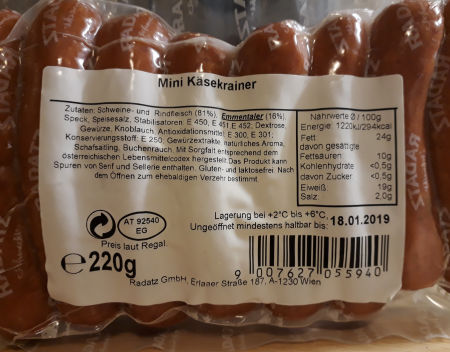 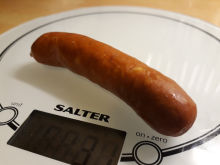 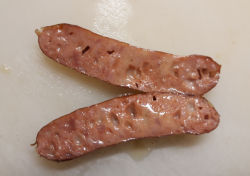 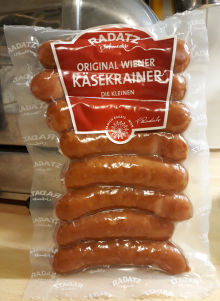