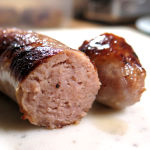 On the way back home from a birthday weekend celebration trip and stay on the Norfolk coast, we had a bit of car trouble and we needed to call the garage.  As we got in to Swaffham market place unusually there was an easy space to park so we decided to stop, make the call, have a coffee and de-stress!  Hmm?  There's butchers shop over there, won't be a minute...

The coffee stop (and a bite to eat as it happens) was at the Market Cross, which is an entirely different glowing review on Trip Advisor, but gave me some time to look about.  The Papworth Farm Shop was just across the road so I look at this as fate and you know things do happen for a reason I'm sure.  Norfolk Champion sausages...I'll cut to the chase...absolutely stunning!

I bought a large pack as there was an offer and I'm always up for an offer on sausages, especially for 12 large bangers for £5.  From the look of them in the raw they did look good.  So back to the troops at the coffee stop to explain where I'd disappeared to, which wasn't a surprise for them evidently I'm told...am I that predictable?

J & D Papworths are a traditional Norfolk Butcher and Grazier, who sell quality meats from their own farm and retail in their own butchers shops located in the Norfolk market towns of North Walsham, Fakenham, Sheringham and Swaffham.  The farm is based around the market towns of Aylsham and North Walsham in North Norfolk.

I will admit at this point, as we had slightly overloaded and bought "a few" other sausages on the trip, these did go in the freezer for a short while.  Defrosted they did still look good though so hopefully no bad effects were caused.  The Norfolk Champions are a nice plump sausage with 80% locally farmed pork in natural skins, and to be honest, the whole lot went in to the "big" pan in one go.  We don't usually do this but I had frozen the whole pack so we had to use them all once defrosted...

A big pan of sausages is a lovely sight and the aroma from these whilst they sizzled away was excellent.  The skins worked well with no splits at all, and none of that white stuff oozing out either.  Top notch.

The texture was a good medium, the skins cut easily, and the bite and chew was excellent.  The seasoning was spot on and the slight tingle of spice on the tongue afterwards was glorious.  There's something to be said about a plain pork sausage when quality ingredients are used, and skill and passion are in the making...but then again, these are not just a plain pork sausage...they are a 5 banger mark sausage!

I saved a couple for a sandwich for the day after, and eaten cold they were lovely...

Would we buy again?  Oh yes! 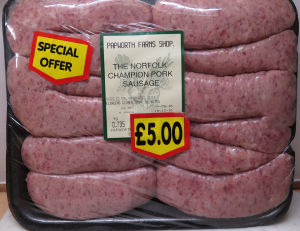 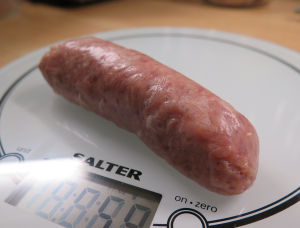 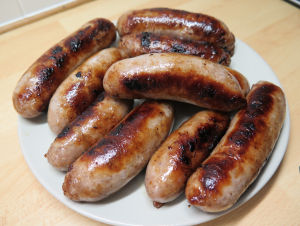 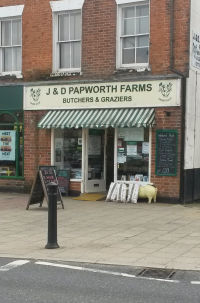