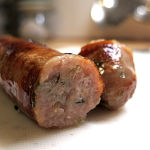 Every now and then we will admit to just picking up a packet of random sausages just to try. We saw these particular ones in the local Sainsbury's supermarket and yes OK the "Guinness" connection was the draw...

Loughnane's production we read is located in Galway, in the west of Ireland, so it'll be Irish pork in these 85% meat examples.  The "Guinness" added is some 7% with 2% leek, so on splitting the pack would we get a realistic aroma of the stout?  As it happens, yes very much so!

The natural hog casings did work well with no splits when cooked up but they were very chewy unfortunately.  I overcooked deliberately on one test sample to see if the skins would crisp but sadly no it remained quite rubbery.  Shame really as the sausage itself had a powerful stout flavour and a very good taste.  There was a touch of extra residual oil and stickiness (probably from the cooked out stout) in the pan we did note, but although we did have some burnt on bits on the outside of the sausages, nothing serious really.  I had bought a couple of packs if honest, one for us and one for the "in-laws" to try as they do like the "dark stuff".  They reported back much the same. Very good pleasing taste but tough-ish skins.

Texture-wise the cooked sausage was just about medium which gave a good munch, and the meat retained reasonable succulence.  A fair weight loss but no shrinkage to speak about so at 50p a go not bad value. All in all an OK reasonably priced sausage with a very good flavour, but sadly let down by rubbery skins.

Would we buy again?  I might get another pack when I see them, for the BBQ... 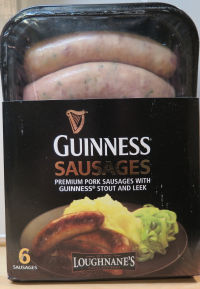 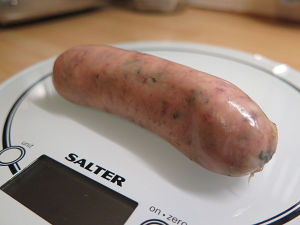