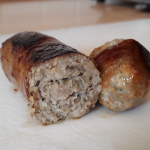 OK, why these we hear you remark...to be honest we saw a review in the Sunday Express S-magazine recently and thought they gave them a 9/10, surely not? These things have to be done...we are going in!...

We picked up a pack from Lidl in our travels and at £1.89 for a 400g pack of 6 sausages we were not entirely sure we would be getting shall we say a quality product even though the packaging did say "deluxe" and "quality outdoor bred British pork", and had the "Red Tractor" and RSPCA Assured stamps.

80% pork blended with 9% caramelised onion chutney, 3% roasted onion plus rice flour (these are Gluten Free), onion powder, etc etc all loaded in to natural pork skins.  On the face of it, the ingredients looked OK.  The raw sausage also looked OK with nicely filled cases and the sausages all still in a string. However the sausages themselves did feel a little "soft" prior to cooking, but hey the troops said, get on with it!

So our method for testing/sampling for consistency is to pan fry, yes we know you may prefer using another method, but pan frying is what we do.  A dot of cooking oil in the pan and temperature on a low heat to just sizzle the sausages, avoiding "case-hardening" them.  Boy Scout campfire sausages, black on the outside and raw pink in the middle is definitely not what we do.

As soon as the sausages started to heat through though, we noticed that pale ooze appearing that does nothing for appearance and frankly for us is a "de-merit" straightaway.  Yes the pale ooze goes but it flows in to the pan and burns leaving a very sticky residue that can coat the sausages and make them stick in even a non-stick pan. 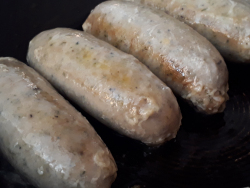 The sample sausages also increased in size width-wise to a point where the skins contorted, leaked and a considerable amount of liquid/juices were squirted in to the pan.  We tipped the pan out later and found there was over 10g more of it than we started with!  Whilst 10g doesn't sound a lot, that amount is considerable in terms of liquid. Perhaps we are being too critical about this but there you go.

The skins themselves once cooked up also proved very rubbery and tore rather than cut cleanly with a knife.  The chewing of them was OK but not nice.  However, the actual taste/flavour was VERY GOOD.  The sweetness from the onion chutney etc., was well under control and texture of the meat was soft(ish) but still certainly acceptable at near medium.

The shrinkage and weight-loss though were staggering unfortunately.

I cannot say personally that I enjoyed these, but there a was a "thumbs up" as an OK sausage from a couple of the team, but how these sausages were given a 9/10 in the other review is somewhat surprising.

Let's face it, you only get what you pay for, and at £1.89 a pack, what can you honestly expect when compared to premium sausages?

Eaten cold, they were still sweet, a tad slimy, and sorry, but they wouldn't be something we would purchase again. 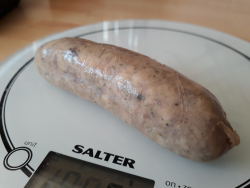 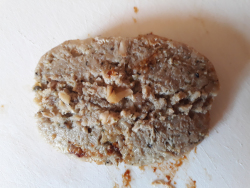 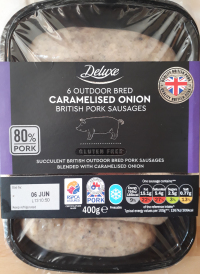