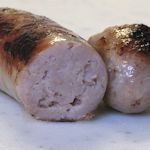 We picked up Granny from just this side of Lowestoft to bring her home here for her birthday celebrations with the family, and as the A12 was traffic heavy, Manningtree way we decided to go...

Just off of the A14 junction 56, then only a few hundred metres on you see the signs for Jimmy's Farm.  Let's call in for some lunch and perhaps buy some sausages then?

Well, what a good decision.  A right good, interesting farm shop AND a cracking restaurant. Smashing lunch (compliments to the chefs)...and so on to the sausages...

We did buy a very good looking taster sausage pack with a kilo of 6 different flavours (£10 for 6x3 sausages, more on that later) but I was intrigued by the Ipswich Super Blue's. Made in honour of the "Boys in Blue" at Ipswich Town FC evidently!

So 6 of those also found their way in to the shopping bag!

I'm not a big fan of Stilton cheese I will be the first to admit, neither is some of the team when it's put in sausages either but in the name of culinary exploration, we just had to try these.

Cooked up, the natural skins browned nicely, worked really well, with no splits and none of that annoying creamy stuff leaking out and caramelising / burning as we've seen in quite a few lesser samples recently.  The aroma from the pan though was definitely Stilton as they cooked up, but surprisingly it wasn't over the top at all.

So taste-wise...yes the Stilton is there but the balance is not bad at all  with a good hint of it strengthening the pork flavour rather than overpowering it!  The texture is smooth to medium and the chew is very good.

Eaten cold later, the Stilton taste comes through a touch stronger to be honest.  OK though...

These are a very good, well made sausage, we all agreed but sadly not completely to all the teams' taste unfortunately.  A bit like a marmite moment to be honest I suppose.  You either like Stilton or you don't!

Really worth trying these yourself though...make your own mind up! 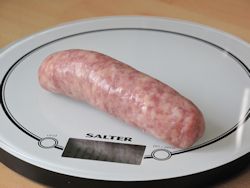 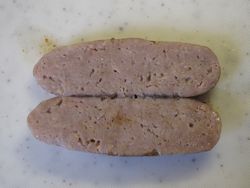 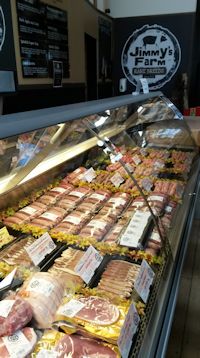