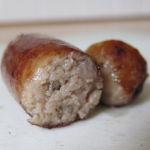 Choosing to go cross country or rather the scenic route to Ware in Hertfordshire, to avoid the madness of the A414 dual carriageway, I passed a small retail area in the residential North of the town near Wodson Park and found GS Picketts Family Butchers...

It looks like Picketts - The Ware Butchers - have been serving Hertfordshire residents from their Ware shop for some 61 years.  A proper butchers I will say selling a wide range of meat product.  The client I called in to see, commented that she uses Picketts rather than visiting the supermarket, which is what I've heard from a couple of other people locally too.

We bought some CUMBERLANDs from the display which looked in the raw very good.  Made on site I was informed and approximately 82% meat content in natural skins confirmed also, as I asked the young butchery assistant and he looked it up in their sausage makings recipe book!

Cooked up we did have a few eruptions from the sausage ends as everything tightens up and squeezes the filling.  This isn't detrimental but it does nothing for the overall look with of blobs of meat hanging out of the sausage ends. The skins worked well with no serious splits but there were a few minor ones. The sausages did plump up noticeably loosing a bit in their length.  Perhaps the frying pan got a tad too hot and the skins overheated so I'll put that down to us being a bit heavy handed in the testing. The texture however was a bit open given 82% meat content. The butcher I also spoke to said they use rusk in the making rather than breadcrumbs, so the texture and softness was surprising.

Weight loss was quite noticeable, and shrinkage, minimal.

Flavour-wise yes got the pepper and seasoning, which was in moderation and made for a good tasting sausage, but not, what we would call, a stonking Cumberland sausage.

The conclusion though: a pretty good everyday sausage that worked well with our mash, onions and thick gravy... 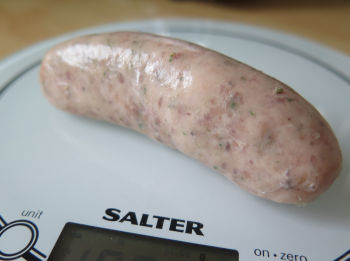 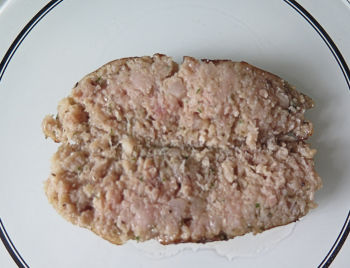 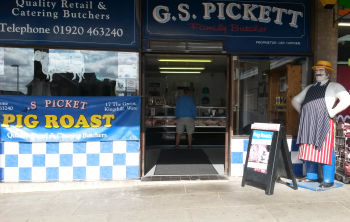