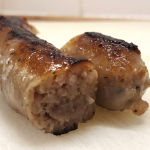 We decided to "go away" for Christmas holidays this year to The Cotswolds.  More specifically Broadway, in Worcestershire.  I did my research and located a traditional and locally respected family butchers shop just round the corner.  "Oh dear" said the family once again...

I will admit that I had assistance with the research as the visitors book at our rental had entries that praised Collins of Broadway for their produce, so it would have been remiss of me not to at least go and have a look!

Tucked away in Kennel Lane, off the main street, nearly opposite famous The Lygon Arms Hotel, the shop just a short walk up the lane.  As it was Christmas Eve, the shop was buzzing with people picking up their turkeys and such.  Nice shop and very helpful people.  I had been instructed that we had sausages in the fridge, and not to buy anymore...12 chipolatas don't take up much space now do they? 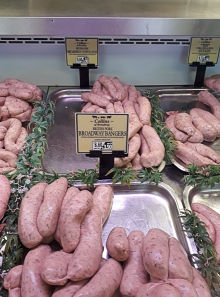 Needless to say, yes, I bought some.  Nice looking items too although the display looked a tad untidy, but I'm not surprised with all the swift purchasing and collections going on.

The chap serving (Liam) told me that the Broadway sausages are very popular locally and the chipolatas just like their big brothers (The Broadway Bangers) are 65% minimum locally sourced British Gloucester Old Spot pork with rusk rather than breadcrumbs plus Collins own blend of herbs, and a "little" sage, all loaded in to natural skins. Nice!

I asked about whether pan frying or otherwise was the best approach to cooking these as we'd had comments about us always pan frying for tastings, and the response was whatever you find was best. Whichever way, you will find these sausages very tasty.  Well, pan fried it is then.

So out of the wrapping paper we did notice these chipolatas, even with skinny skins, were quite soft and slightly baggy to the touch.  Now during cooking we know the skins tighten and not overfilling the skins during the making does allow for a bit of room so the skins don't split.

In the pan with the whole 12, well let's not mess about, and they cooked up lovely.  Nicely browned skins, with a really good aroma but we did notice a bit of extra rendered fat/oil in the pan, which given I'd cooked the whole 12 in one go we felt we weren't going to mark these down too much on that.  However we couldn't ignore average weight loss per sausage at approximately 25% though.  Shrinkage was approx 9% which is fair.  Had we grilled or oven baked to prepare these, the figures may have been higher?

"And what do they taste like" we hear you say.  Well they were quite strong in flavour.  Not quite that wild boar strength of flavour, but certainly stronger than we expected.  We liked them, but it would be wrong to pass over the fact.  Also the texture was quite open making the sausage, even as a chipolata, quite soft.  The skins also we didn't find as "snappy" as we've had on some other chipolatas.  We don't mean burnt to a crisp snappy, just a gentle snap when you bite them. Speaking to some producers we are aware that they use the same mix for their larger bangers as they do for the chipolatas of the same name, but it makes it easier to fill the thinner chipolata skins if they pass the mix for them specifically, through the mincing machine one more time.  Whether the skins were very under-filled in this case, would be hard to say, but the firmness of the meat just wasn't there and so the chew for these was a little bit disappointing.

Good flavour and seasoning though, but we (that's all of us here) sadly didn't get the sage that I had been told had been added to the mix.

The bottom line - yes a pretty fair chipolata sausage, and one we would probably buy again from Collins of Broadway.

( pssst! Try some of their award winning pork pies!  Too good to miss! ) 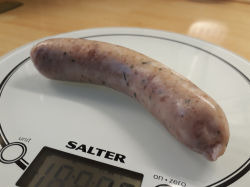 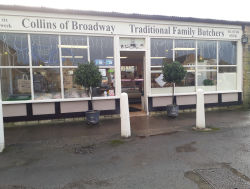